A masters cyclist just won two back-to-back stages of the Tour de France, five years after his last Tour stage win and after being largely written off as a great rider whose time had passed. At 36, Mark Cavendish is not the oldest Tour de France stage winner, but his journey from stardom to nearly retiring in anonymity and back to the Tour podium has captured the imaginations of athletes who thought their best days were behind them. If Cavendish’s resurgence has inspired you, here’s a guide to reinventing yourself as a cyclist 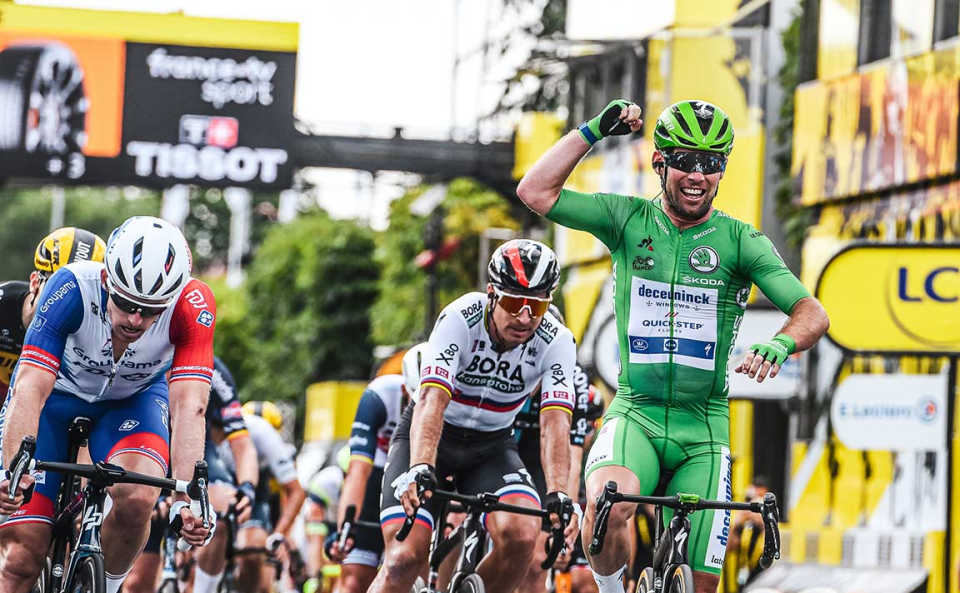 by Chris Carmichael, Founder and Head Coach of CTS

To be clear, I don’t know the specific details behind Cavendish’s transformation because I don’t work with him. The recommendations below are based on what my coaching staff and I have learned over the past 21 years from working with more than 20,000 athletes, many of whom achieved striking transformations that echo what we’re all seeing from the Manx Missile.

It has been noted by cycling commentators that Mark Cavendish started working with a different coach and performance team when he moved to Deceuninck-Quickstep. Athletes change over time (and so do coaches), and sometimes refreshing the coach-athlete relationship creates opportunities to look at training, motivation, and accountability through new lenses. It’s not necessarily that one coach is smarter or better than another, but rather that the new relationship and new way of doing things motivates the athlete to be more committed, enthusiastic, and confident.

At CTS, athletes moving from one coach to another is normal for our long-term athletes, and it’s one of the reasons we all use the same terminology for workouts and intensity ranges, etc. Each coach applies his or her own style and personality to the way they coach, but because we use a consistent and proven foundation, athletes can move seamlessly to a new CTS Coach and keep making progress.

Make a break from the past

Don’t be afraid to shake up your training. Effective training has to be based on solid sports science principles, but there’s more than one way to apply those principles and improve performance. Many people cling to a training method because it worked five years ago. If it’s not working anymore, that just means you’ve developed as an athlete and human and need a new approach that fits the person you are right now.

Start fresh, with no regrets. If you’ve been struggling with training and nutrition habits that have been holding you back, don’t drag them forward into your new program. Drop them, along with any feelings of guilt or frustration associated with them. Today is the first day on the journey to being the athlete you want to be. It’s good to learn from your experience, but you’re not bound to it.

Surround yourself with strong, motivated people

Like many professional athletes who are fortunate enough to have long careers, Mark Cavendish had some great years and his share of misfortune. He was a dominant sprinter, winning 30 stages of the Tour de France between 2008 and 2016, but in 2017 he was sidelined by the Epstein-Barr virus and crashed out of the Tour de France. In 2018 he crashed repeatedly in races throughout the spring and was sent home from the Tour de France after failing to make the time cut on Stage 11. In 2019 he wasn’t selected for Team Dimension Data’s Tour squad at all, and he moved to the Bahrain-Merida team for 2020. In October 2020, he gave an impromptu and tearful admission after Ghent-Wevelgem that it may have been the last race of his career.

Longtime team director Patrick Lefevre of Deceuninck-Quickstep offered Cavendish a contract for 2021. At the time it seemed like a publicity stunt, and Deceuninck-Quickstep certainly garnered a ton of press attention for it. Fast forward to the post-race interview after Stage 4 of the 2021 Tour de France, and notice how Cavendish talks about his teammates, what they’ve done for him and how they believe in him. His performance has been elevated by his teammates and the “wolfpack” culture of the team. If you’re not around athletes who will push you to be better, it’s important to find or create that environment.

Well deserved @MarkCavendish ?????? worth saying up into the early morning in Australia ???? pic.twitter.com/2kZeyC6xre

Get some wins under your belt

Winning isn’t everything, but it sure helps. I can run through the training data that shows you have improved your power at lactate threshold, your VO2max, or your 30-second peak power, but all of that pales in comparison to the power of winning. It provides a great confidence boost, dispels self-doubt, and sets the stage for more victories to come. As coaches we create sequential challenges for athletes so they can experience success and build on it. In the spring of 2021, Mark Cavendish went to the 8-stage Presidential Tour of Turkey, a solid race in the UCI Pro Series (one step below UCI World Tour) and won 4 stages! It was an example of putting a racer in an environment that’s challenging, but where the chances of success are reasonably high. Those were his first wins since 2018, and he’s been on a roll since.

Your “wins” don’t need to be in competitions. In fact, race wins are not a great goal to set when you’re trying to build confidence, because so much about competition is out of your control. I encourage athletes to shoot for wins in personal challenges, like local segment times, training consistency, performance at the group ride, etc. Of course, a race win here or there doesn’t hurt…

To transform your performance you have to transform your attention. Many athletes think they are highly focused on the details of training, nutrition, and recovery when they’re really not. You don’t need to become a single-minded monk, but take an honest look at how you’re using your time and energy. Both are finite, so it’s likely you’ll need to take something off your plate in order to commit greater attention to training. Just remember, the distribution of your priorities is always changing. You may make training a higher priority for a while, but the balance will inevitably shift and rebalance over time (as it should).

Limiting beliefs do limit performance. It sounds corny, but you have to believe you can transform your performance and lifestyle or it won’t happen. The role of a coach and/or mentor is to believe in a person’s potential until that person believes it for themselves. Patrick Lefevre took a chance on Cavendish, believed in him, showed him that the team believed in him, and eventually Cavendish came around to believing it too.

Negative thoughts and self-doubt occur for everyone, even champions, and sports psychologists recommend acknowledging those thoughts and feelings, naming them, and redirecting them. That can be relatively easy when everything is going well and reality isn’t reinforcing your negative thoughts, but during prolonged periods of injury or poor performance that task of redirecting gets tougher. That’s when an external voice from a coach, mentor, sports psychologist, or therapist can help you get unstuck and nudge you toward a more productive mindset.

You probably noticed that there’s nothing in these recommendations about specific interval workouts or some magical intensity zone that triggers miraculous comebacks. Mark Cavendish didn’t win back-to-back Tour de France stages because of a new workout; he reinvented himself as an athlete, which reignited the passion he put into training and the focus he directed to everything that contributed to his training. And the best part is, I know the same process can work for you because I’ve seen it transform the lives and performances of athletes for more than 20 years.