Pogacar wins in Mountains again to dominate the Tour

Overall leader Tadej Pogacar again proved his dominance on the Tour de France as he won a second consecutive mountain stage in the Pyrenees on Thursday and said "it's a game for me." 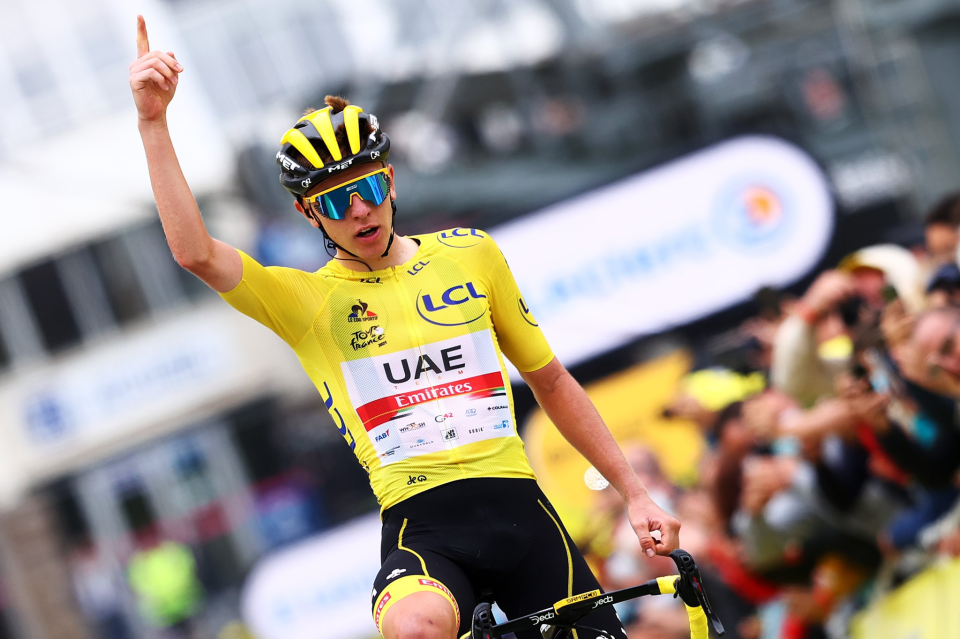 On a short final mountain stage of 130km, Pogacar out-ran his two closest rivals, Jonas Vingegaard and Richard Carapaz, just as he did on the previous day. Pogacar won his third stage and took the Polka Dot jersey, wearing the Yellow and White jerseys too.

The 2020 champion continued the most dominant run in recent Tour memory, by climbing on to the post-race podium four times – as stage winner, as best young rider, best climber and as the runaway overall leader.

The peloton left Pau under a shadow on Thursday after an overnight anti-doping raid on the Bahrain-Victorious team at their hotel.

"It's something strange, maybe just one more control to see nobody's hiding anything," said Pogacar of UAE.

"We only found out in the morning, I don't know what to think," he said of the raid.

But by the time an Ineos quartet were leading the remnants of the pack up the final climb of this Tour de France, however, the focus was on the possible challenges to the leader on the road.

"It was full gas racing today, Ineos were pressing from deep," the leader said of what was likely Carapaz's last chance to unseat him.

"We had nothing to lose today, so we are happy," said the Ecuadorian.

"Our goal was to win the stage, I think we put up a good fight."

With 3km left Pogacar, Vingegaard and Carapaz were left to cross swords in a pulsating uphill battle to a finish line above the clouds at the ski resort of Luz Ardiden with hundreds of thousands of fans along the roadside and cycling-loving French President Emmanuel Macron in the director's car at the head of the action.

The struggle was quickly settled.

Pogacar raced ahead with ease over the last kilometre and slowed down to take a look over his shoulder as he crossed the line for his third stage win on this edition.

"I felt good and I'm really happy with the win. It's a game for me, I'm enjoying playing it," said the 22-year-old who has dominated in the mountains and on the all important time-trials, just as Spaniard Alberto Contador and Briton Chris Froome did in their time.

But Pogacar was adamant he was not on the cusp of greatness.

"This is not the 'Pogacar era', but for sure a new generation is here," he said.

"It's important to have fun and enjoy what you are doing. Some you win, some you lose but always have fun, my coach says," Pogacar said smiling and looking relaxed.

"Tomorrow I aim to enjoy every minute of the flat run," he said of Friday's stage.

He did admit worries about the final challenge, a 30km time-trial, "You can lose six minutes over 30km like that," he said.

Pogacar pulverised the opposition on the first time-trial which he won on stage five.

Vingegaard is on paper a better time-trialist than Carapaz, but with only a few seconds between the pair it is too early to call a top three.

Whatever happens in Paris, the events in Pau on Thursday may take longer to run their course, after French police said the investigation was in its preliminary stages.

Bahrain Victorious had a visit by the police and riders were asked for training files and the team bus was checked. Riders were disturbed for one hour last night and no reason was given for their visit. The team continues business as normal today.

Bahrain Victorious leading the team classification in the Tour de France, he said to the press, "Pure jealousy! I didn’t sleep last night because I was so irritated. We don’t deserve this. In our world, if you ride strongly, they say you're up to something, if you ride slowly, you're a nobody."

"A preliminary inquiry has been opened to see if there has been, or not, acquisition, transport or possession of banned substances," the Marseille-based police unit overseeing the matter.

Bahrain Victorious leads the team classification with an advantage of 34’16’’ over EF Education-Nippo.

Mark Cavendish will be looking to take his 34 stage sprint and beat Eddy Merckx's record. He also has a final chance on Sunday on the Champs-Elysees in Paris.