What is Lactate Threshold and How Do Cyclists Train It?

One of the first goals many athlete mention is how to improve lactate threshold (LT), although they might use a proxy for it – Functional Threshold Power (FTP). Those terms are often used interchangeably because power at LT and FTP are typically very close. Both indicate maximal sustainable power

Specifically, that means the effort you can maintain for about an hour. Many athletes know increasing threshold maximizes performance allows you to go faster for longer. However, not many understand what lactate is, what lactate threshold really means, and what’s required to improve LT. 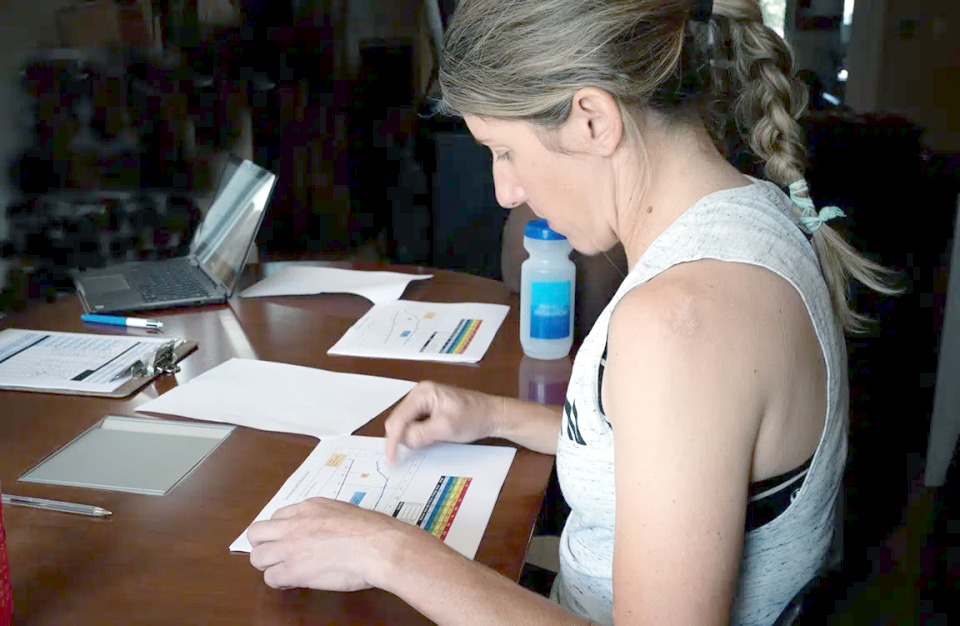 What is Lactate and Lactate Threshold?

Lactate is a biproduct of metabolism – specifically the breakdown of carbohydrates (glycolysis). It is an important fuel for muscles and other tissues, and spoiler alert: it doesn’t cause fatigue, nor does it make your muscles burn (that’s from the hydrogen ions associated with it). However, whenever blood lactate is high, fatigue and muscle burning are on their way. So, it’s understandable why lactate has endured such a bad rap.

Blood lactate response during exercise indicates how well we are producing energy aerobically, how much energy is being produced anaerobically, and what fuels are used to produce energy. As a result, this gives us a good indication of how long we can hold an effort.

We can go for a long, long time (hours and hours) producing energy aerobically from the breakdown of fat. Fat is a nearly unlimited fuel source for athletes, and even the leanest pro athletes have enough energy stored as fat in the body to fuel multiple days of racing. However, with limited carbohydrates stores, we only have enough to fuel a limited amount of exercise. Depending on intensity, that’s about 90 minutes. Even when supplementing with carbohydrate during exercise, we simply can’t take in enough carbohydrate to provide all the energy needed for the length of most endurance events. So, the ability to use fat as a fuel source is a key to sustained endurance performance by sparing our limited carbohydrate (glycogen) stores.

How much energy we can produce aerobically goes back to aerobic capacity – delivery and uptake of oxygen by the muscles. This is because aerobic energy production takes place in mitochondria – you know, the powerhouse of the cell. The cells with the most mitochondria are slow-twitch muscle fibers and your capacity to work aerobically is determined in large part by the mitochondrial density of those slow-twitch muscle fibers. Slow-twitch fibers, as the name indicates, produce energy relatively slowly but are very resistant to fatigue.

At high intensity, energy demand is greater than we can supply aerobically. That’s when anaerobic metabolism kicks up. Anaerobic metabolism doesn’t require oxygen. We use it when there is not enough oxygen present to meet demands, or when demand is so fast that we don’t have time to produce energy aerobically. Fats aren’t broken down in anaerobic energy production, only carbohydrates, and these anaerobic processes happen in fast-twitch muscle fibers, which fatigue quickly. Again, remember carbohydrate stores are limited, which is another factor to how long we can sustain high intensity efforts.

This high rate of anaerobic metabolism of carbohydrate (glycolysis) produces a lot of lactate. We clear it by either using it in aerobic metabolism in the muscles or sending it to the liver to be turned into fuel for other tissues. As energy demand increases, lactate production eventually rises to a point where we cannot clear it as fast as we make it – hence, we reach a “threshold” of production and clearance.

Lactate threshold is the intensity at which there is a dramatic spike in blood lactate measured during an incremental exercise test. That point indicates when production exceeds our ability to clear lactate.

We perform these kinds of tests in our physiology lab at CTS headquarters in Colorado Springs. The protocol for lactate threshold testing is to start at an easy intensity (Zone 1 Recovery) and gradually increase intensity (power) every few minutes until blood lactate increases dramatically or until the athlete fatigues.

- You can see lactate remains very stable through the first six stages (100-200 watts). That is an indication energy is being supplied predominantly by the aerobic break down of fat.

- We start to see lactate elevate just above baseline between stage 6 and 7 (200 to 220 watts). Although that is not what we label “lactate threshold,” it is a threshold of sorts. We call it the Aerobic Threshold or LT1, and first jump of lactate from baseline is the indicates a greater contribution of energy from the breakdown of carbohydrate.

- We know we have exceeded threshold on stage 9 (260 watts) where there is an exponential increase in lactate indicating that clearance can’t keep up with production.

Lab tests measure blood lactate response to determine maximal sustainable power, and we can set training zones based on an individual’s blood lactate response along that curve. In contrast, field tests use raw percentages of power from a timed effort to estimate threshold and set zones, and those percentages are based on a bell curve of human performance. For most people 95% of a 20-minute time trial effort is very close to LT and to what they can sustain for about an hour. So, Functional Threshold Power (FTP) is the actual power someone can sustain based on performance. It is not the exact same thing as lactate threshold because blood lactate is not measured during the test. We can also use historical training data to derive a modeled estimate of an athlete’s FTP.

Below: A visual representation of how training zones relate to lactate response.

Below: Intensity zones relate to blood lactate response, substrate utilization, and duration those intensities can be maintained.

Lactate Threshold Training and Improvement
So, how do we improve lactate threshold? The aim isn’t to increase it to a higher level of blood lactate. Even when fitness improves, most will still break around the same blood lactate (4.0 mmol/L). Instead, the biggest impact to improving lactate threshold is to improve the body’s ability to produce energy aerobically, and that pushes the inflection point that indicates threshold out to a higher power output.

We see on this follow-up test that the entire lactate curve shifts to the right because the athlete can produce more power before lactate rises. The baseline values for lactate production are similar until the Aerobic Threshold (LT 1). Compared to the first test, lactate levels in the second test don’t begin to rise until a later point (220 vs 200 watts). The spike in lactate, indicating lactate threshold, occurs at higher power (260 watts vs 220 watts). This data indicates the athlete can do more work through aerobic metabolism than before and has also improved lactate clearance.

The primary methods of improving LT are from improving the aerobic system and enhancing aerobic capacity. Oxygen delivery improves from adaptations to the cardiovascular system: increased blood volume, increased oxygen carrying capacity of the blood, increased stroke volume of the heart, and increased capillary density to deliver oxygen to the muscles. Additionally, oxygen uptake improves in the muscles through greater mitochondrial density (more and bigger mitochondria) and increased enzyme activity in slow-twitch muscle fibers.

You can train your lactate threshold to be a higher percent of aerobic capacity (up to 85-90%), but LT cannot exceed maximum aerobic capacity (VO2 max). Consequently, athletes with the highest power at lactate threshold – pros who can maintain 6+ w/kg at LT – must have an extremely high VO2 max (70+ ml/kg/min) to accommodate that high threshold. VO2 max is trainable but has a genetically limited ceiling. That is why, unfortunately, I will never be able to keep up with Marianne Vos!

Lactate clearance improves with increased aerobic capacity. Enhanced blood flow and capillary density helps shuttle lactate away from the working muscle. The liver converts it back into glucose for use in other tissues. So, increased mitochondrial density means greater opportunity to use lactate as fuel for aerobic metabolism in muscle.

Now, here’s my pitch for the value of Endurance Zone 2 training. Training at low-to-moderate intensity increases mitochondrial density in slow-twitch muscle fibers, where aerobic energy production takes place. As a result, that allows for faster lactate clearance. Next, increased mitochondrial density also improves your body’s ability to use fat as a fuel source. This delays fatigue by sparing glycogen (stored carbohydrate). Therefore, Zone 2 training is a win-win for endurance athletes. It’s not the only training necessary to improve lactate threshold and overall performance, but low intensity training is good for more than just aerobic endurance. That’s because it creates the foundation athletes use to improve performance at lactate threshold and higher intensities.

Improving lactate threshold, or more specifically the intensity (power output) at which lactate threshold occurs, is an important performance metric. Lactate doesn’t cause fatigue, but lactate response to exercise can tell us valuable information about the interplay of aerobic and anaerobic energy production and substrate utilization.

Lactate is a product of the breakdown of carbohydrate. As exercise intensity increases, we shift from using fat to carbohydrates as fuel. As a result, a dramatic increase in lactate indicates a shift in substrate utilization. Before the increase, we were primarily using fat as fuel in aerobic energy production in fatigue resistant slow-twitch muscle fibers. As intensity increased, so did the percentage of energy derived from anaerobic glycolysis. This accelerated the breakdown of limited carbohydrate stores in highly fatigable fast-twitch fibers.

Improving power at threshold and FTP is limited by a person’s aerobic capacity (VO2 max) but can be maximized by further development of anaerobic capacity. It means you can go harder for longer and is the crux endurance performance.

As it has since 2000, Carmichael Training Systems leads the endurance coaching industry with proven and innovative products, services, and content. And the results speak for themselves; no other coaching company produces more champions, in such a wide variety of sports and age groups, than CTS.