Mohoric planned downhill attack on the Poggio to win Milan-SanRemo

Matej Mohoric upset the favorites with a planned attack on the Poggio and rode away from a select bunch of 10 riders including Tadej Pogacar, Wout van Aert and Mathieu van der Poel. Mohoric nearly crashed twice and shipped his chain in his all out attack with 3 km to go 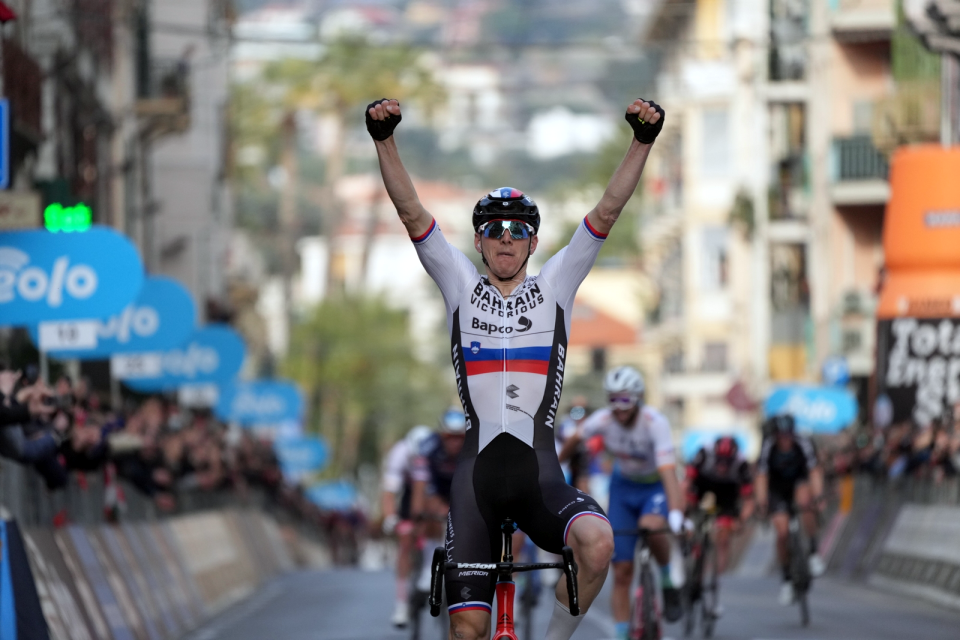 Mohoric, a stage winner on all three Grand Tours, launched an devastating attack on the final descent after around 290 kilometres of riding to claim the season’s first Monument.

Mohoric's mechanics at team Bahrain Victorious equipped his racing bike with an MTB dropper seat post to help him lower his centre of gravity on the tight turns. The Slovenian hit a curb launching his attack and had to bunneyhop back onto the road at high speeds.

Risking everything to maintain his lead, he nearly crashed on the final turn.

Mohoric saving it down the Poggio. Says he used a mountain bike dropper post pic.twitter.com/yKFnVfCBt7

On the flat run into the finish line on via Aurelia, the favorites couldn't catch him and crossed the finish line ahead of France’s Anthony Turgis and Dutchman Mathieu van der Poel.

He won despite nearly crashing twice on the descent and dropping his chain in the final few hundred metres following nearly six and a half hours of cycling.

His attack came after four unsuccessful attempts from Pogacar and another from Primoz Roglic on the Poggio climb, which is traditionally one of the launchpads for the race winner.

Instead, Mohoric defied convention by making the decisive move on the descent. He darted down a winding slope before joining the via Aurelia and crossing the line in front of a shocked and ecstatic crowd.

“I managed to get up the Poggio with the top riders and I thought to myself ‘It’s now or never’, and it turns out it was now,” Mohoric said.

“I made a mistake on the final turn as I took it too fast and slid and then I had problems with my chain but thankfully I did it.

“After two years with no fans it was wonderful seeing all the people… It was a really wonderful day.”

With big names Julian Alaphilippe, Caleb Ewan, Sonny Colbrelli and last year’s winner Jasper Stuyven all out, Pogacar and Van Aert were the big favourites heading into the race.

Pogacar, aiming to become the first reigning Tour de France champion to win Milan-San Remo since Eddy Merckx in 1976, was in a main group which reduced to little more than 30 riders on the Cipressa climb.

Meanwhile three-time world champion Peter Sagan, who had suffered a mechanical problem, desperately tried to rejoin the leaders on the winding 3km descent from the Cipressa.

UAE Team Emirates rider Davide Formolo led a select peloton for his teammate Pogacar while Jumbo-Visma and Van Aert lurked, a high pace helped by a tail wind setting up an intense finish for the last Poggio climb.

The finale didn’t disappoint as Pogacar tried in vain to push away from his rivals with attack after counter-attack up the hill.

And with all eyes on him and Van Aert, Mohoric made his move, flying past his more famous rivals to take by far his biggest one-day victory.

“I was thinking about this race for the whole winter,” Mohoric said at the finish. “The team came up with the idea of using a dropper post. This race suits me very well and has a descent at the end. I knew that if I could train properly over the winter and try to be in a good enough condition to not be dropped on the Poggio and be with the best guys over the top that I would have a chance of doing my best descent and risking a little bit but being able to hang on for the win.”

“The team set up a bike for me and we had this plan for a long long time now. I was thinking at first maybe it’s not going to make a huge difference on the descents but then I tried it in training and the first time I tried it I was like amazed of how much safer [it is], it gives you way more control over the bike and if you go full gas, you can go a little bit faster. And even it’s easier to avoid mistakes or correct them when they happen. I was in perfect condition after I was ill in February for Strade Bianche but unfortunately I had quite a big crash when Alaphilippe crashed and I hurt my knee pretty bad so I was off the bike for three or four days but I never stopped believing.”

“I said if we worked so hard this winter and set up the bike and everything then we need to make the best of it. I did a lot of physio, every night, every morning and I did some basic training to keep as much condition as possible. Today, I’m here. I was not going super well but it was enough to hang on with the best over the Poggio and then I just went all in and I can’t believe it!”