7 Tips for Mastering a Cycling Paceline

There’s something special about a well-organized high-speed paceline. By sharing the work of pushing through the wind miles fly by at speeds no one in the group could achieve solo. A good paceline epitomizes teamwork and the notion of a group being better than the sum of its parts 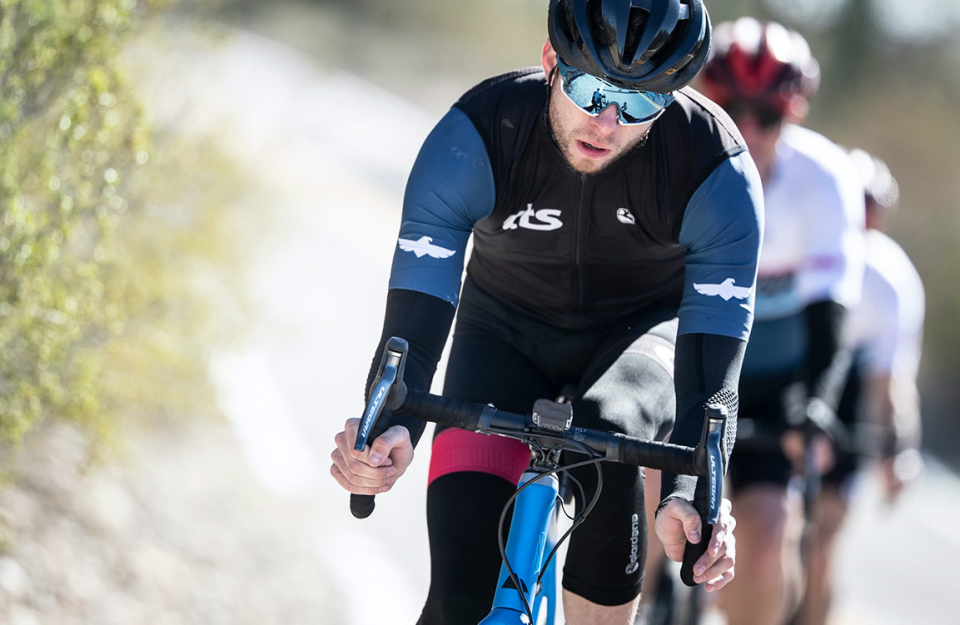 On the other hand, a raggedy paceline is torture. The speed is all over the place, everybody’s stressed out and twitchy on the brakes, gaps open up, people get dropped; it’s a mess. After coaching pacelines and team time trials for decades here are tips for smoothing out the paceline at your local ride.

Elite racers use motorpacing – drafting behind a scooter – to ride at or above race pace in training, without a peloton. For most amateur cyclists a fast paceline is a variant of motorpacing.

You’ll be going faster than you could maintain on your own, your power output during pulls will be higher than your normal SteadyState or individual time trial intensity, and you’ll dramatically improve your pacing skills for group rides and breakaways. You will also gain confidence in your handling skills at higher speeds.

If your local group ride is more of a social pack, I recommend finding three friends and forming a 4-person team for a 20km team time trial workout. Your goal is to cover the distance as fast as possible while staying together as a group (no dropping anyone!). I recommend this for cyclists who participates in Gran Fondos, road races, and criteriums, as well as triathletes. Though many triathlons are not draft-legal, a team time trial workout is great for developing speed and awareness of terrain, wind, and effort levels.

Tips for mastering the paceline

My intent here is not to teach the basics of how a single rotating paceline operates, but rather how to turn a sloppy paceline into a faster, smoother, and less scary experience for everyone.

Be aware of the terrain

Little riders go uphill fast, but big riders roll the downhills and flats faster. You don’t want the group to splinter, which means each rider has to think about the optimal pace for the team when deciding how hard to ride on the front. Killing the big guys by charging the climbs means you’ll be slower on the downhills and flats. Crushing the flats might also put your group’s smaller riders so far into the red zone they can’t contribute to the pacemaking, or can’t keep up at all.

Ride smart in the recovery line

As you rotate off the front you have to immediately consider what it’s going to take to get back on the last rider’s wheel, especially in faster pacelines. My old friend and 7-Eleven teammate Davis Phinney used to pull off and essentially stop pedaling. He’d go backward like he dropped anchor, but he was a sprinter so he could accelerate onto the last wheel with three strong pedal strokes. Non-sprinters (like me) pulled off and maintained more speed as we dropped back. That way there was less of an acceleration needed to get back into the pull line.

Part of being smart with how long you stay at the front is conserving enough energy to get back into the draft at the back. If you pull so hard you can’t latch onto the last rider’s wheel once you’re turn is over, the group will either leave you behind or everyone will have to slow down to wait for you. In a group setting a “full pull” is only over when you’re safely back in the draft. Think of it all as one effort (pulling, pulling off, and getting into the draft at the end of the line) rather than only focusing on the time at the front.

The faster you go, the tighter you want the group, because the benefit of drafting increases at higher speeds. But keeping the group tight requires a lot of little speed adjustments. Riding too heavy a gear at a low cadence makes it difficult to cope with these frequent adjustments. Aim to maintain a cadence around 90-100. You don’t need to exaggerate the cadence to something extremely high; you just don’t want to bog down.

To go fast as a group you have to be flexible and remember that the goal is to keep the speed high. Take shorter pulls in harder terrain, take longer pulls if you have a tailwind assisting you, and don’t fry a rider by pressuring him/her into taking pulls longer than they can handle. If you’re getting tired or are not as strong as the others, take shorter pulls but make sure you’re maintaining the group’s pace while you’re on the front.

The second rider in the line gives the marching orders

The second rider (not the leader) is the best person to judge the intensity and position of the team on the road. If the wind has shifted, this rider should let the lead rider know if he needs to move right or left so everyone is drafting and the last guy isn’t stuck in the gutter. The second rider should also tell the lead rider – unless it’s painfully obvious – which side to pull off on. Sometimes the lead rider isn’t as acutely aware of where his teammates are finding the best draft, especially when the road and wind direction change frequently.

If you need to skip a pull, tell the rider in the recovery line to jump in

Sometimes in competition you try to skip pulls quietly, but with your group ride buddies be nice and speak up. If you’re struggling to hold the wheel ahead of you or you know you need to skip a pull, tell the rider coming back in the recovery line, “In!” This should be the signal for that rider to fill the gap rather than continuing back to get onto your wheel.

As you can see, mastery of the paceline emphasizes communication and situational awareness. You have to care about what’s good for the group in order to get the greatest contribution from everyone in it.