Remco Evenepoel took the biggest win of his career with a devestating attack at cycling's oldest classic Liege-Bastogne-Liege race, as Belgian riders took all the podium places 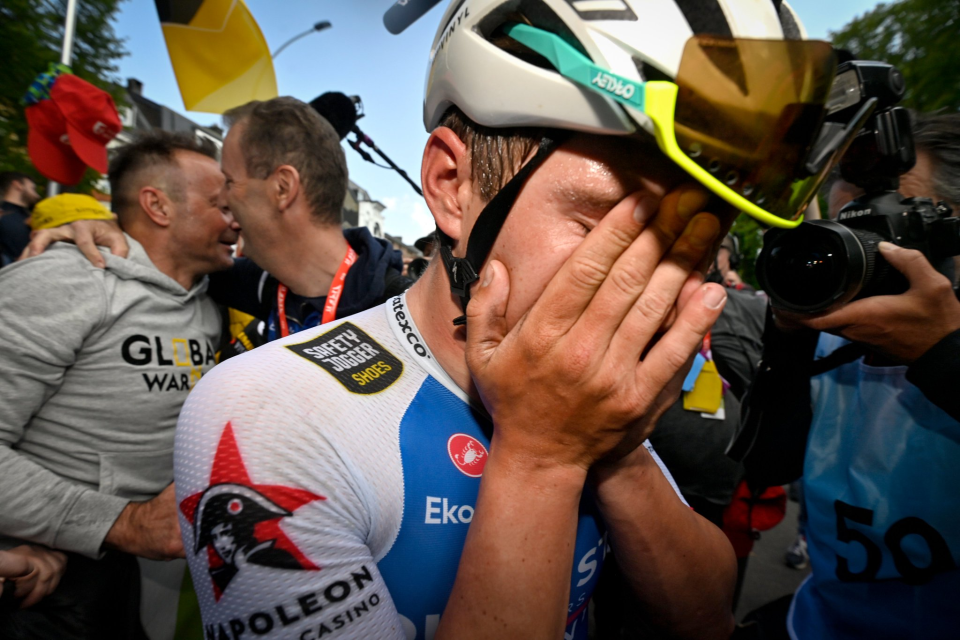 Evenepoel triumphed in "La Doyenne" at his first attempt on Sunday, aged just 22.

Evenepoel raised his arms and buried his face in his hands as he added his name to a list of winners that includes the likes of all-time cycling greats Eddy Merckx and Bernard Hinault after a solo victory.

"It's my first Liege and I won, it's a dream come true," said Evenepoel, who rides for the Belgian outfit Quick-Step-Alpha-Vinyl.

"Finishing alone, with a lead of almost one minute in my favourite race, it's unbelievable."

Quinten Hermans won the sprint for second place ahead of Wout van Aert in the 257 km race.

Evenepoel made his move with 29km to go, when he attacked on a narrow and steep stretch of road from a chasing group including other pre-race favourites.

He pushed on with a solo effort to catch and pass the remains of the breakaway, to solo to the finish line.

Evenepoel came to prominence during his first pro season with the Deceuninck-Quick Step team in 2019 when he won the prestigious Clasica San Sebastian. He also secured a silver medal in the time trial at the world championships that year.

His career was put on hold for several months following a crash in Italy that left him with a fractured pelvis and a damaged right lung.

Evenepoel crashed inside the last 50 kilometres on a downhill stretch, hitting a bridge wall and going over it into a ravine.

"I've been suffering mentally and physically a lot the last year and a half and finally this year, I feel that everything is going well, everything is getting stable and I'm getting to the best Remco again," Evenepoel said.

"I think today I've been showing the best Remco since turning pro."

Liege-Bastogne-Liege is one of the 'monuments' of cycling - the five most prestigious one-day events in the sport - along with the Tour of Flanders, Milan-San Remo, Paris-Roubaix and the Tour of Lombardy.

World champion Julian Alaphilippe was forced to abandon after getting caught in a mass crash with about 60 km to go.

His team said Alaphilippe fractured his shoulder blade and has two fractured ribs and a collapsed lung.

"His condition is stable but will need to be hospitalised for observation," Quick-Step Alpha-Vinyl said.