Stephen Williams (Bahrain-Victorious) took his first WorldTour victory at stage one of the Tour de Suisse, outsprinting a plethera of GC contenders on the opening stage this Sunday 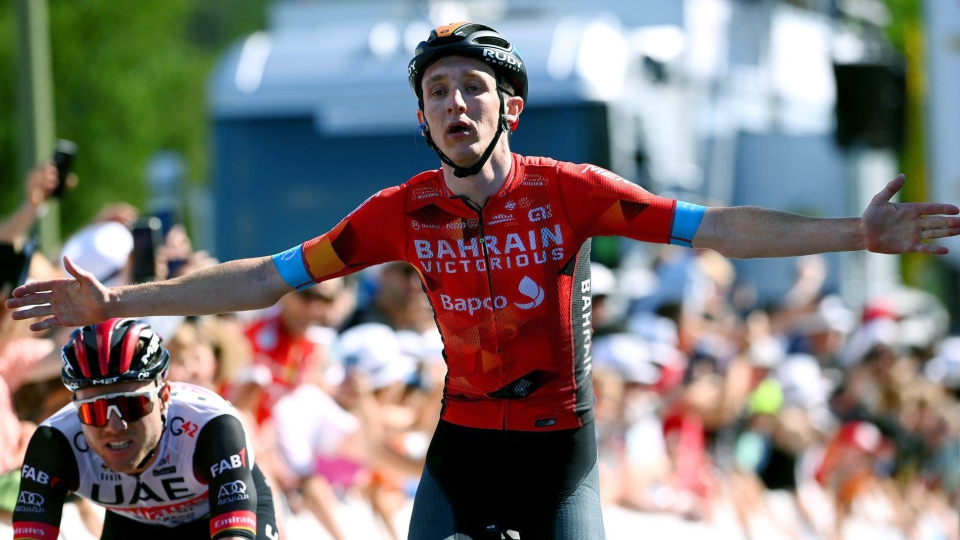 The hilly 177.6km opening stage of the Tour de Suisse put on the table a terrain very much to the attackers’ liking, and our team just couldn’t miss this rendez-vous.

Quickstep moved to the front of the peloton to take over the reins soon after the breakaway formed, and produced another huge effort, gradually chewing into the seven-man breakaway’s three-minute gap and bringing them into the bunch’s view on the final lap of the Küsnacht circuit, consisting of two hard climbs.

At the bottom of the last of the day’s eight ascents, Fausto Masnada pushed an insane tempo with Liège–Bastogne–Liège Remco Evenepoel at all times in his wheel, before peeling off once his job was done and the peloton was reduced to some 20-odd riders. When the attacks came, Evenepoel was the first to answer, making a selection in an instant.

That small group was caught by what was left from the peloton before Remco went again, at 1500 meters to go and with only one other rider for company. For a brief moment there, it looked like they would go all the way to the line, but the chasers joined them with just 500 meters left, and the stage came down to a sprint.

Stephen Williams (Bahrain Victorious) won it on the line.

The enormity of the win took time to process, for the 26-year-old from Aberystwyth in Wales, UK.

"I don't think it's sunk in yet, to be honest," he said, once he'd had time to collect his thoughts. "It's been a strange few years - to come here and win a stage, I am over the moon."

Williams' strongest result was 77th on stage one of the Tour of Romandie. He had surgery on his knee in 2020, and placed 43rd on the GC at the 2021 Tour de Suisse - his best stage placing being 25th.