On the hunt for stage wins at the Tour de Suisse this week, Team DSM and Andreas Leknessund delivered on their promise of aggressive racing as Leknessund powered to a brilliant solo win from the breakaway 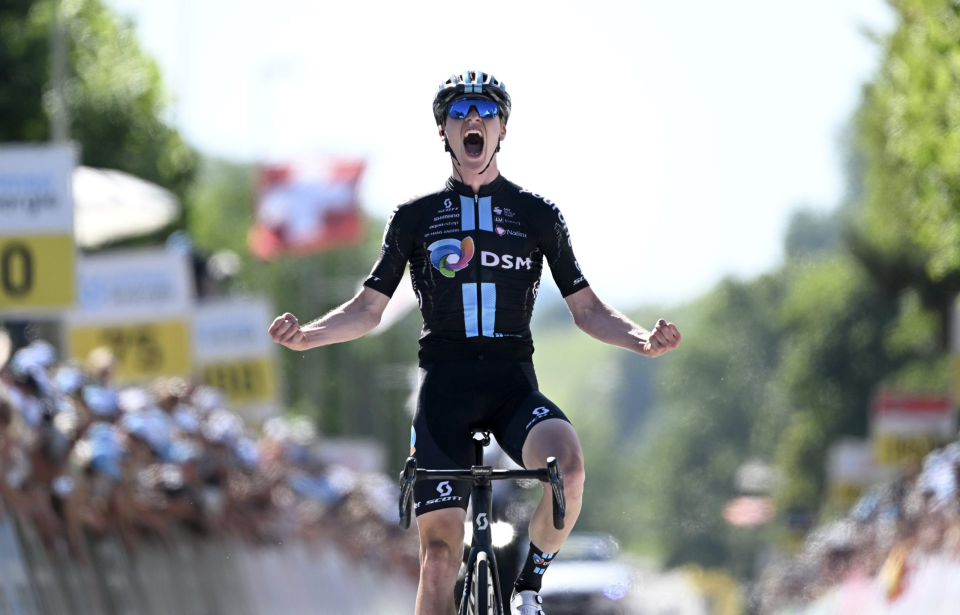 After yesterday’s opening day under the shining Swiss sun, Team DSM were back in action for stage two at the Tour de Suisse; faced with another rolling stage and some challenging climbs. It was a fast start to proceedings with the bunch still compact after 25 kilometres before the elastic eventually snapped and a group of eight forged on, with Leknessund riding well to make the move for the team after some good work by the rest of the guys/

Two more riders bridged across to them and the now group of ten worked well together, building up their advantage to three minutes where it held steady for the following 80 kilometres. An easing in pace in the bunch and continued cooperation in the break saw the gap increase even further, and heading into the last 60 kilometres it stood at just under six minutes.

Hitting the categorised climbs Leknessund rode strongly, staying out front as the breakaway slowly whittled down in numbers which was also reflected in their time gap and as they hit the foot slopes of the last ascent, their advantage stood at two minutes with 20 kilometres to go.

Sensing a moment to push on as the pace slowed, Leknessund launched a stinging attack and broke clear from the rest of the break inside 18 kilometres remaining. Putting the power through the pedals, he continued to extend his advantage over the break and held the peloton at bay over the top of the climb, where the rest of the team rode towards teh front and discouraged the chase.. Hitting the apexes on the sinuous descent, Leknessund hit the valley road with his minute lead still intact. Not giving up and being encouraged by the car behind, he powered on all the way to the finish straight, before sitting up and raising his arms aloft in the final few metres; taking in the adulation from the crowds and celebrating his first WorldTour level win in his career.

“I don’t have much to say, it’s unbelievable, I’m really happy to have taken the win for the team,” beamed a jubilant Leknessund at the finish. “It was full gas all day. The hardest part was on the last climb and we felt that if I could get the gap over the peloton then we could make it to the line. In the final kilometres I was suffering but also could enjoy it. We came here for stage wins and now we have one, so for the rest of the days I will try to follow and see, but to be aggressive still and go in the breakaway again will be nice so we can go for another top result.”