Here's everything you need to know about this year's edition of Le Tour, which starts on July 1st in Copenhagen, Denmark

The second Grand Tour of the 2022 season, the 109th Tour de France, begins on Friday July 1st in Copenhagen, Denmark, and will end as usual in Paris on Sunday July 24th.

Tokyo 2020 medallists Tadej Pogacar, Primoz Roglic and Wout van Aert headline the race that will cover a total of over 3,300km across 21 stages. There are five summit finishes, two time trials and six flat stages.

Slovenia's Pogacar is looking to claim the winner's yellow jersey for the third consecutive year, matching a feat most recently achieved by four-time champion Chris Froome (2015, 2016, 2017).

Denmark becomes the 10th country to host the Grand Depart. The 2022 route will also go into Belgium (Stage 6) and Switzerland (Stages 8 and 9), making it the first time since 2017 that four different countries feature in the same edition.

The last day of the men's Grand Boucle will coincide with the start of the historic eight-stage inaugural Tour de France Femmes, which replaces the La Course one-day women's race.

Tadej Pogacar: comes into the 2022 Grand Boucle as the overwhelming favourite. The Slovenian has won every stage race he has taken part in this season (UAE Tour, Tirreno-Adriatico, Tour of Slovenia) and is going for a hat-trick of victories on the Tour at just 23 years of age.

Primoz Roglic: came agonisingly close to the GC win in 2020, while he had to abandon the race last year following a crash. The former ski jumper seems to have recovered from a knee injury that affected the first part of his season and is fresh from an overall win at the Criterium du Dauphine.

Daniel Martinez: With 2019 winner Egan Bernal still recovering from a horrific training accident, his fellow Colombian is ready to be the leader of Ineos Grenadiers after taking the Tour of the Basque Country this spring. The British team has won seven of the Tour's last 10 editions and Martinez could share the leadership with 2018 champion Geraint Thomas, who recently won the Tour de Suisse.

Geraint Thomas: His recent Tour de Suisse win makes him a contender and will share Ineos Grenadiers with Daniel Martinez.
Jonas Vingegaard: The 25-year-old Dane finished as a surprise runner-up in 2021, and this season with two second places at the Tirreno-Adriatico and Dauphine has shown he's ready to step up if his Jumbo-Visma teammate Roglic is not fully fit.

Aleksandr Vlasov: Following Jai Hindley's success at the Giro d'Italia, Bora-Hansgrohe's hopes of winning their second Grand Tour this year lie on the shoulders of the Russian rider riding under a neutral flag. Vlasov took impressive overall victories at the Volta a la Comunitat Valenciana and Tour de Romandie, but he was forced to abandon the Tour of Suisse for Covid when he was leader.

Matej Mohoric: Winner of Milan Samremo this year, add Matej to the growing number of Slovenian riders on this list. He’s unstoppable on descents and isn’t scared to go all in.

David Gaudu: An exciting French rider who could be a throw up for a great general classification or a stage win, or of course, the climbers jersey.

Last year's points competition winner Mark Cavendish is unlikely to be selected by his team Quick Step-Alpha Vinyl and that means that the 37-year-old Manxman will have to wait before being able to surpass the legendary Eddy Merckx for number of stage wins (both are tied on 34).

The Belgian team will be led by Dutchman Fabio Jakobsen, who is hoping to take advantage of the sprint opportunities. Australian Caleb Ewan of Lotto-Soudal also fancies his chances.

The course includes several hilly stages and that might favour puncheurs such as record seven-time green jersey winner Peter Sagan, who recently was back to winning ways at the Tour de Suisse before withdrawing due to a positive Covid test. Other contenders for the green jersey will be multi-talented riders Mathieu van der Poel, who wore the leader's pink jersey at the Giro for the first three stages, and Wout van Aert, who took the points classification at both the Criterium du Dauphine and Paris-Nice this season.

Michael Matthews: The Australian will take his chances on the green jersey and possibly try for wins from a breakaway.

Mark Cavendish: (We are all hoping he is there.  No description needed.)

Wout Van Aert: Mountains, Time Trials and Sprints, the Belgian rider can win on all terrains.

Mathieu Van der Poel: Another unstoppable powerhouse- watching MvdP race is nothing if not fun.

Pogacar secured the king of the mountains classification at the last two editions, and in the history of the Tour only four riders have won it more than twice (the record belongs to Richard Virenque with seven).

The Slovenian talisman will probably be challenged by some of the other GC contenders (Roglic, Vlasov, Vingegaard), as well as by Frenchmen Thibaut Pinot, who recently took the queen stage of the Tour de Suisse, and 2019 polka dot winner Romain Bardet, who was forced to leave the last Giro after suffering from stomach issues.

David Gaudu: An exciting French rider who could be a throw up for a great general classification or a stage win, or of course, the climbers jersey.

The Tour can neither be won in a 14km opening stage time trial, nor can it be lost. What it can be is a harbinger of potential - or lack thereof. What we’ll be looking to see is how the favourites fare against their own high standards. To be in with a chance of taking his first Tour de France victory, elder Slovenian Primoz Roglic probably needs to ride his best time trial ever!

We haven’t seen a lot of Tadej Pogacar since mid-spring, and none of him in a major stage race since Tirreno-Adriatico, but there is the reasonable fear that he may be even stronger than 12 months ago. Opening day will offer our first clue. As for the stage itself, Filippo Ganna will win it. And if he doesn’t, Wout van Aert probably will.

Commeth the cobbles. 19.4km of the rough stuff is why Primoz Roglic and Jonas Vinegaard rode the GP Denain in March. The peloton needs to cover a total of eleven cobblestone sections on the 153.7-kilometre course from Lille to Arenberg Porte du Hainau. These sectors that add up to a total of 19.4 kilometres of toughest pavés – all to be found in the second half of the race – are not to be underestimated. The last time John Degenkolb was successful in bright sunshine on such a stage was back in 2018. For last year’s winner Tadej Pogacar this stage is a first and could also be an acid test, as he has never ridden on such a brutal cobblestones in a race.

La Planche des Belles Filles became La Super Planche des Belles Filles by adding a steep 24 percent ramp to the already difficult climb in the Vosges. The first mountain finish of this Tour de France will show who is still in the race for a top ranking at the end of the “Grand Boucle”. Maybe “Pogi” and “Rogla” will be in for an early duel on this climb – that may offer the latter a chance to take revenge. 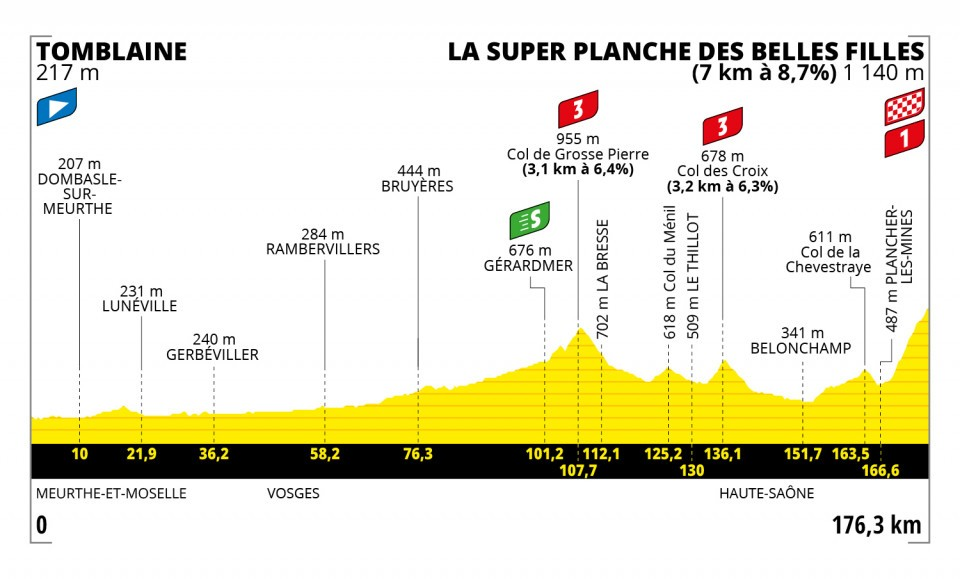 The first day in the high mountain region – and what a day it is. The stage is only 149 kilometres long and starts in the Olympic city of Albertville. It then heads in the direction of this year’s Tour roof via the Lacets de Montvernier: the Col du Galibier with its 2,642 metres, the highest point in 2022, and a souvenir of Henry Desgrange. Riders will climb it via the Col du Télégraphe – two passes that add up to 29.6 kilometres uphill all in all which are only interrupted by a short descent to Valloire. Via Col du Lautaret riders descend from the Galibier before they enter the difficult and final ascent to Col du Granon – a Hors Categorie climb like the Galibier. The 11.3 kilometres with an average gradient of 9.2 percent will very likely have an impact on the overall classification – maybe even a pre-decision will be made this early in the Tour. 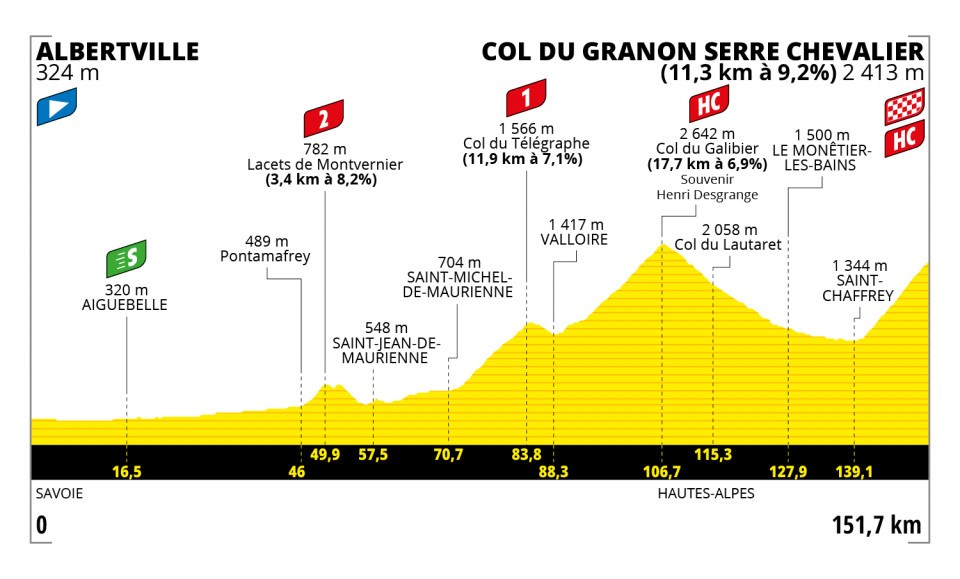 Riders will experience a déjà vu on that day, as they will need to climb the mountain they were descending from yesterday. The ascent starts in Briancon and leads over the Col du Lautaret up to the Col du Galibier. Not an easy start to this day, which is a special one for the Grande Nation. 14. July is a bank holiday and loaded with expectations. Of course, they want a French rider to win today.

From the Galibier, the course leads over the Telegraphe down into the Maurienne valley. From Saint-Jean-de-Maurienne an ascent of almost 30 kilometres and an average of 5.2 percent leads the riders to the Col de la Croix de Fer, a Hors Categorie climb, like Galibier, and also to that day’s final climb: the mythical 21 hairpin bends up to Alpe d’Huez. The serpentines will be lined with tens of thousands of spectators and will make for the sporting fireworks of this holiday on the one hand and very likely tear large gaps between the groups of riders on the other.

There will be two races in one on this stage through the Massif Central between Saint-Étienne and Mende. On the one hand, the battle of the breakaway riders for the stage win. The terrain is predestined for a group to successfully break away. The only question is when the group will form. On the other hand, GC contenders will fight for seconds on the final climb in Mende. The Côte de la Croix Neuve, also known as Montée Jalabert, is three kilometres long with a gradient of more than 10 percent, followed by a short descent across the airfield to the finish line.

The headline of this stage could either read “The last mountain finish of this Tour” or “What a finale in the Pyrenees”. The peloton needs to conquer two Hors Categorie climbs and one 1st category climb on just 80 kilometres. Starting from the pilgrimage of Lourdes the course leads again over the Col d’Aubisque (16.4 kilometres with an average gradient of 7.1 percent), then over the Col de Spandelles (10.3 kilometres with an average gradient of 8.3 percent), and to the final climb to Hautacam. Memories of dramas and victories starringe protagonists like Bjarne Riis (1996), Lance Armstrong and Jan Ullrich (both 2003) come to mind. What remained, however, is an average gradient of 7.8 percent over 13.6 kilometres and the chance for the best riders to gain minutes on their opponents