Not a single rider on Quick-Step Alpha Vinyl deserves a spot at this year’s race ahead of Mark Cavendish, well except maybe for Fabio Jakobsen ... 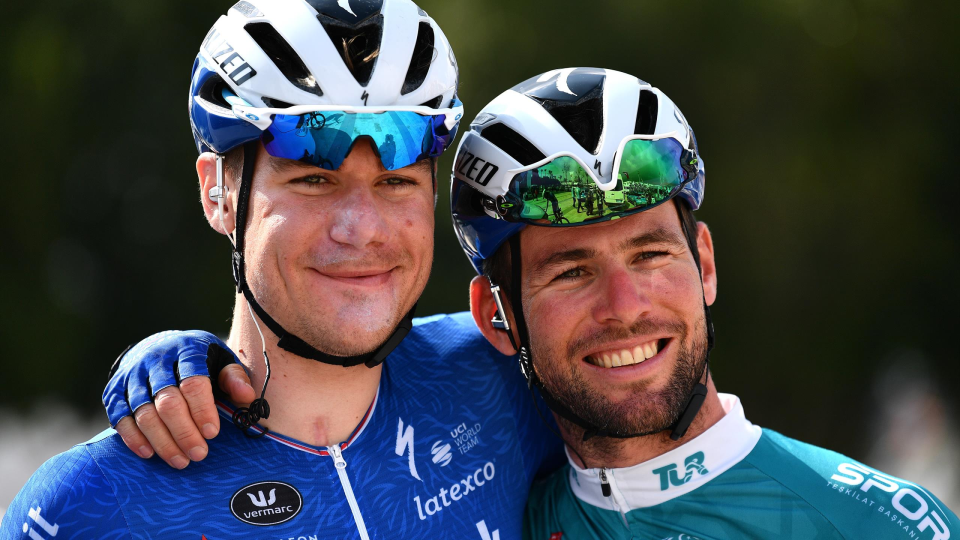 Lefevere gave Cavendish a shot at the 2021 Tour de France. Cavendish took the opportunity to return with a bang,  and four stage wins and the green jersey to tie with Eddy Merckx’s record of 34 stage wins.

Not going to the Tour means Mark Cavendish can't beat Eddy Merckx’s record, the great man himself is quoted as saying he wouldn't mind and would be delighted if Cavendish breaks his record.

Cavendish won a stage at the 2020 Giro d'Italia as Quick-Step Alpha Vinyl sprinter.

But he could be up against teammate Fabio Jakobsen for a place as the team sprinter for the forthcoming 2022 Tour de France.

Fabio Jakobsen meteoric rise bank to the top ranks of cycling has been awe-inspiring after his terrible crash in 2020 in the Tour of Poland which saw him loose most of his teeth and be put into an induced coma.

So far in 2022, Jakobsen has won a stage at the Volta a la Comunitat Valenciana, two stages at the Volta Algarve, Kuurne-Brussels-Kuurne classics race and stage two at Paris-Nice.

Selecting Mark Cavendish would see him put everything on the line for his team to come away with a repeat performance of 2021!

Please Mr Lefevere, can you please do an amazing thing (and be most loved Team Manager in cycling)!?

Please Mr Lefevere, can you select Mark Cavendish and Fabio Jakobsen for the 2022 Tour de France, they can play rock, paper, scissor in the last 3km at the back of the Quick-Step Alpha Vinyl lead-out train to decide whose going to win the stage!?