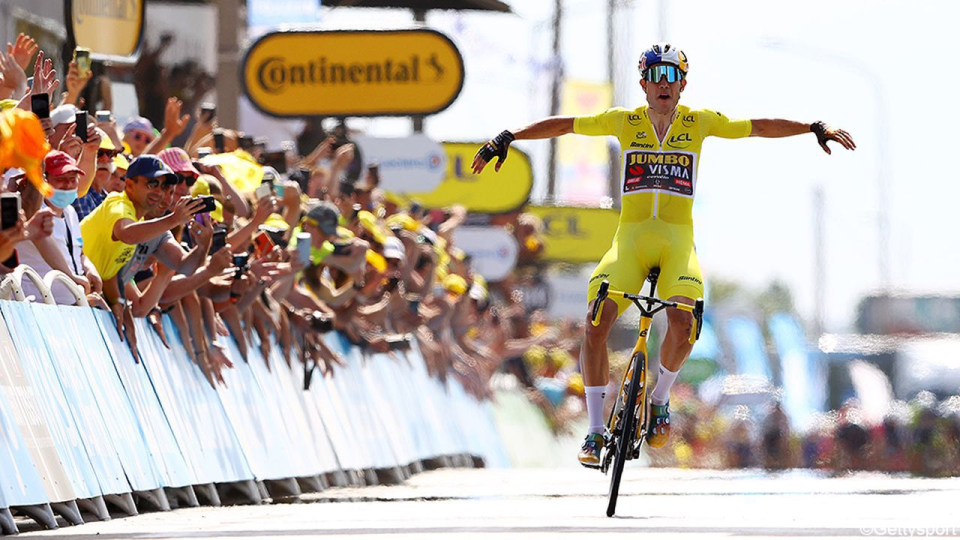 An attack by Team Jumbo Visma, similar to the one used at Paris-Nice saw the team launch Van Aert off the front of the peloton on the final 1 km climb. By the top Van Aert had dropped everyone including his teammates Primoz Roglic and Jonas Vingegaard.

Van Aert, looked back and saw he had a gap and pressed on, time trialling 10km to the finish line.

Behind Japser Phillipsen thought he'd won the sprint ahead of Christophe Laporte (Jumbo-Visma).

A disappointed Phillipsen said "I thought I was sprinting for the win! Then I saw van Aert had already finished?"

Van Aert "We tried something with the team, we were in perfect position, I opened up on the final climb. I reached the top alone and decided to keep going, 10km all out of suffering!"

Van Aert made up for finishing second in the first three stages in Denmark!

Magnus Cort (EF Education-EasyPost) signalled his intentions early on in today's stage in the Polka Dot jersey and Anthony Perez (Cofidis) joined him in the breakaway.

They built up a lead of nearly 7 minutes as Magnus Cort sweeped up all the KOM points.

Anthony Perez attacked with 42 kilometers to go and was caught at the base of the final climb of the Cote du Cap Blanc-Nez.

Tomorrow's stage 5 crosses new cobbled sectors in northern France, the peloton will race from Lille to Arenberg. The stage will contain a brutal amount of cobbles to take on with 11 sectors.