Simon Clarke wins the stage from the breakway as Vingegaard, Roglic, Thomas and O’Connor see their GC ambitions badly bruised from the badlands 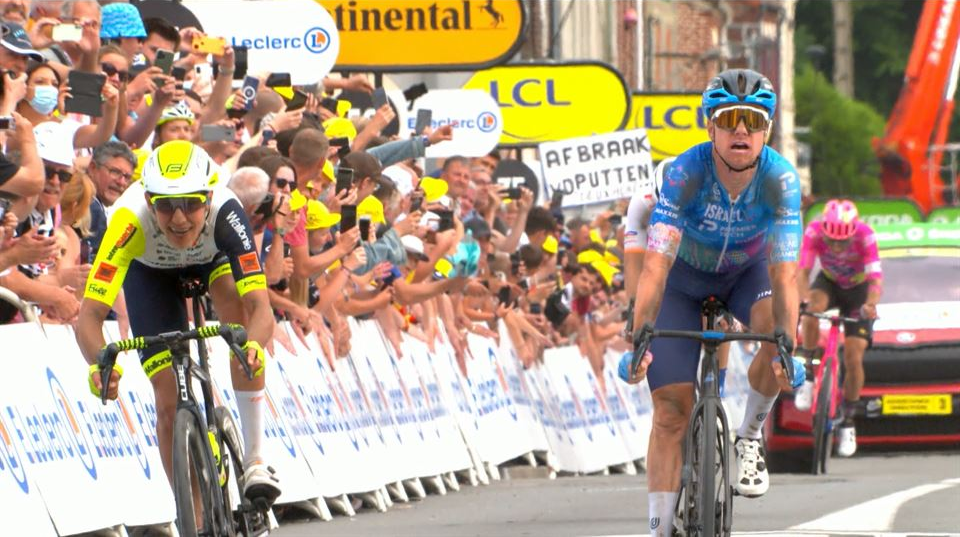 Defending Tour de France champion, Tadej Pogacar, took time from his rivals in a chaotic fifth stage, the UAE Emirates rider leaving his major rivals in the distance in the heat and dust of the cobbled roads of northern France.

In a frenzied stage that at times seemed almost deranged, numerous crashes befell the peloton, including one caused by a rogue hay bale. Many, however, were sparked both by a dog fight to win the stage and fears among Pogacar’s rivals of losing more time to the double Tour winner.

The stage over the dreaded cobbled roads, made famous by Paris-Roubaix, was won by Simon Clarke (Israel-Premier Tech), one of the five-man breakaway, in a photo finish.

Van Aert was one of the early victims with a crash, as Pogacar put the hammer down, Roglic bizzarely hit a safety hay bale on the exit of a roundabout.

There were lots of crashes including Peter Sagan and Caleb Ewan. Jack Haig abandoned the race.

There were bound to be losers when the peloton hit the cobbles, with Jumbo-Visma brusied. The Tour de France is far from over, but the team most expected to challenge Pogacar’s defence is looking worse for wear, not yet tackling any major climbs.

A frantic bruised Roglic was among the day’s biggest losers.

Thursday’s sixth stage is the longest of this year’s Tour at 222 km, heading south, before Friday’s first summit finish at Super Planche des Belles Filles, where Pogacar ousted Roglic in 2020.