A solo attack by Bob Jungels gave him his first Tour de France stage victory on the first Alpine finish of this year’s race, while two-time defending champion Tadej Pogacar retained the leader’s yellow jersey after the ninth stage on Sunday 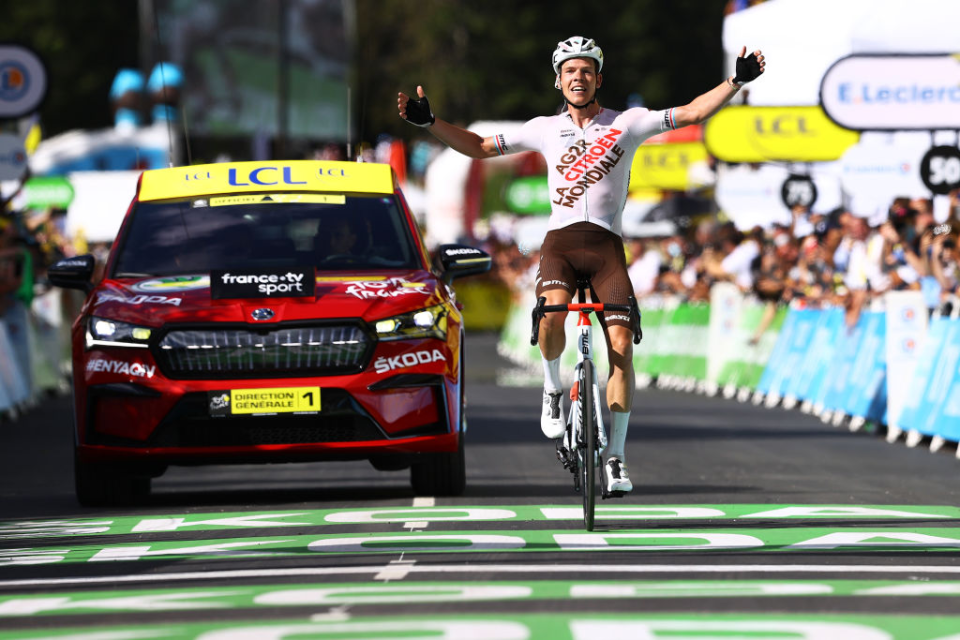 The 29-year-old Jungels, who rides for the AG2R Citroën Team, set off on his own with almost 65 kilometers (40 miles) remaining of the mountainous 193-kilometer (120-mile) route from Aigle in Switzerland to the ski resort of Châtel les Portes du Soleil.

The Luxembourg native had time to sit up and stretch out his arms before punching the air in delight as he crossed the line 22 seconds ahead of Jonathan Castroviejo and 26 ahead of Carlos Verona.

All three had been part of a large breakaway that formed shortly after the first of four categorised climbs of the day.

Jungels attacked near the top of the penultimate climb, the top category Col des Mosses, and was followed by Simon Geschke. The pair reached the summit together with a gap of 25 seconds over the chasing group.

But Jungels was quicker on the descent and managed to drop his rival. He had built a lead of nearly two minutes over the chasing group and more than three minutes over the peloton at the start of the final climb, the a category one Pas de Morgins.

Cheered on by raucous fans lining the roads, French rider Thibaut Pinot attacked and came within sight of Jungels but ended up missing out on a podium place.

“This is huge, this is what I came for. I know this means a lot to the team. Last year it was very difficult with operations. To win this way… It's my way of racing, my way of winning," Jungels said in a post-race interview

His race was in jeopardy as he tested positive for Covid-19 days before the start, but was fiven permission. He dropped out of GC contention alongside team leader Ben O'Connor, but has given his freedom good use. "I'm super happy to see the form getting better every day. But to do such a thing? I knew I had to try from afar, because I knew it probably wasn't possible to break away from the favorites on the final climb," he added.

Pogacar and Jonas Vingegaard sprinted to the line to gain three seconds over their rivals for the overall lead. The Slovenian remained 39 seconds ahead of Vingegaard but increased his advantage to 1:17 over 2018 winner Geraint Thomas.