Pogacar wins stage 17 in the Pyrenees after attacking Vingegaard

The battle between Tadej Pogacar and Jonas Vingegaard has been one that has tilted towards the Danish climber, however today at the Tour de France Tadej Pogacar took a motivating win with a strong team performance which has him dreaming of taking the race lead 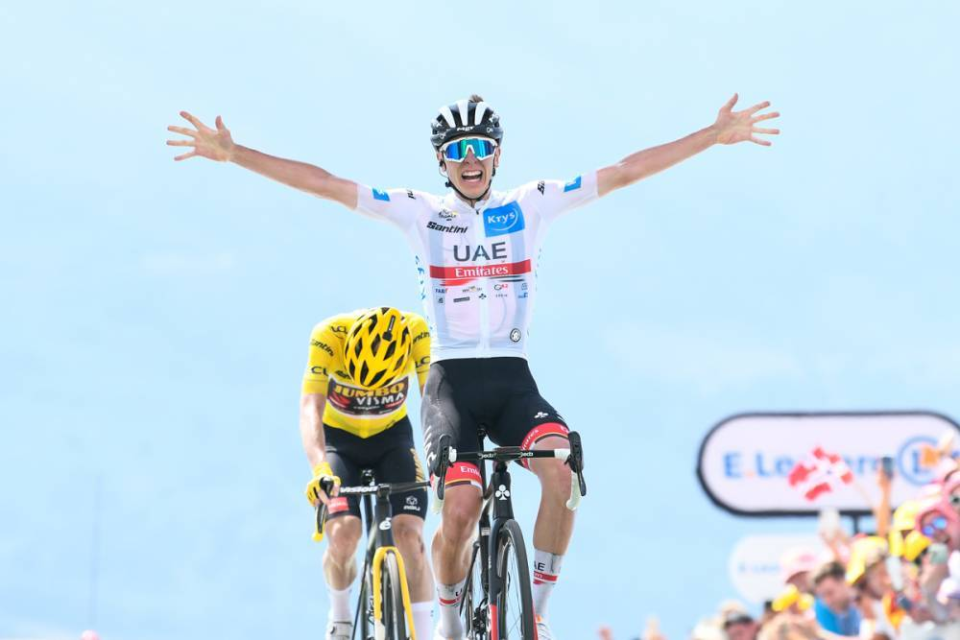 “The way the team rode today with only four riders, just to take the stage win is already incredible. We can all be proud of what we have done," Pogacar said in a post-race interview. "Without Rafal [Majka], George [Bennett], Vegard [Stake Laengen] and [Marc] Soler, we couldn’t try more". However, with the help of Mikkel Bjerg and Brandon McNulty, UAE Team Emirates was able to decimate the peloton entirely, except for the one rider the team needed to drop.

"Mikkel set such a good pace on the climb, I felt so good and confident with that pace, then Brandon did an amazing job in the last two climbs," he described. "He’s been good all the Tour but today he deserves a special mention".

With Bjerg setting the pace at Hourquette d'Ancizan and Brandon McNulty pacing the duo away from the rest of the peloton, the breakaway was caught and the win was in the group. Pogacar bluffed on the final ramp to the finish line, having Jonas Vingegaard launch the sprint first, before making a furious dash to the line to take his third win of the race.

"We’ll see tomorrow if there is another chance but for now I’m happy that I won today. I gave absolutely everything. I knew I had to win the stage for the team. There was no other way. It’s not only because of Brandon [McNulty], Mikkel [Bjerg] and [Marc] Hirschi too," he added.

"I’m so happy! And I’m optimistic that I can still win the Tour. Tomorrow is a harder stage, so we can try again," he concluded. Although he may be able to take time on the final time-trial, it will be tomorrow on the stage to Hautacam where he needs to make the difference in order to still fight for the race win.

Jonas Vingegaard has survived the second out of three days in the Pyrenees against UAE Team Emirates, and is looking to keep the yellow jersey secure tomorrow in Hautacam on his way to what may be a maiden Grand Tour win. Today he defended himself successfully again against Tadej Pogacar, and has described his day on the bike.

“Yes, I lose four seconds. Of course I would have loved to have won the stage, but it was too explosive for me," Vingegaard said after the line in Peyragues. "The end suited Pogacar better. I wouldn't say I started my sprint too early. He's better on a climb like this," the Dane pointed out after a sprint on vicious ramps just as was the case at La Planche des Belles Filles.

“It's not nice to be isolated, but we also lost some teammates. That's the way it is. I really only have to follow Tadej," Vingegaard described. Nevertheless he had the legs on the day and could respond when it mattered - at the top of both Col de Val Louron - Azet and Peyragudes where Tadej Pogacar launched the accelerations.

However, despite his multiple achievements so far in the race, he's still reluctant in saying he's the clear favourite to win the race, responding in a cold and open way the same way his teammate Primoz Roglic has in the past: "I don't want to think about the overall victory yet. I now take it day by day.”

The race leader saw his gap cut slightly, however with 2:18 minutes of advantage and no signs of slowing down, Vingegaard is currently the man to beat with one more real opportunity to be taken down in the climbs.