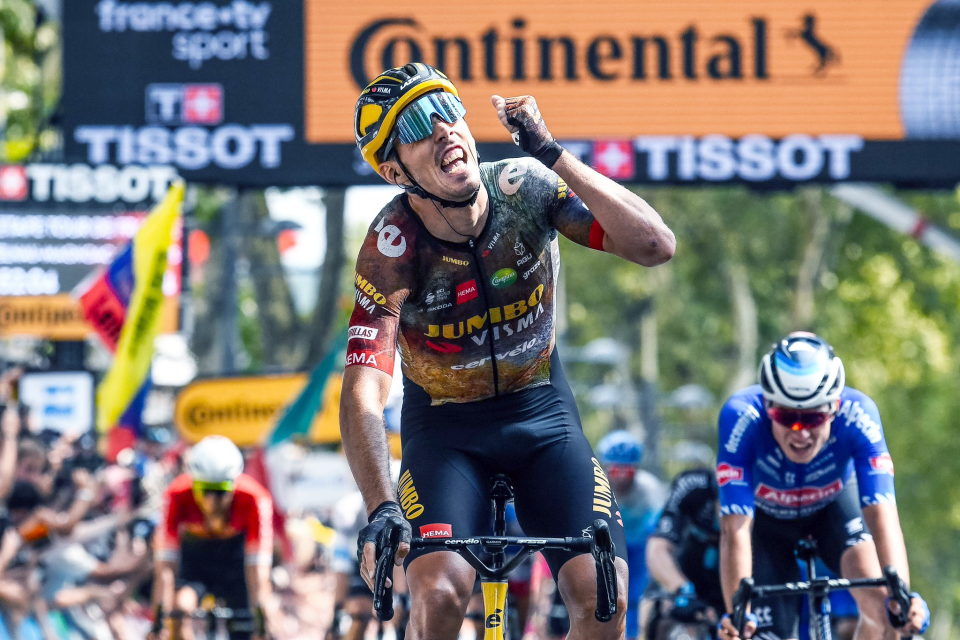 Christophe Laporte has won the 19th stage of the Tour de France to end the French wait for a home victory and to leave the sprinters cursing another missed opportunity.

Laporte burst past Britain's Fred Wright with only 400 metres of Friday's 188km stage from Castelnau-Magnoac to Cahors remaining, giving the local fans something to celebrate for the first time in more than a year.

This had been one of the few stages circled as being one for the sprinters, who've been starved of opportunities since the race left Denmark three weeks ago.

Laporte, a decent sprinter who had not had an opportunity for a stage victory this year, was given the green light by the team's sporting directors to go for it on Friday - and he duly delivered, after French riders had gone 38 stages without a Tour win.

They had not won a stage since world champion Julian Alaphilippe, who is not in this year's race as he recovers from injury, prevailed on the opening day last year.

"A lot of French people had been waiting for this win and I'm happy I gave it to them," said Laporte.

"Going to Jumbo is 100% why I won. Nothing is left to chance in this team. Preparation, nutrition, material. All the riders are world-class. Thanks to that, I won today."

The Dutch team go into Saturday's penultimate stage looking to carry the yellow, green, and polka dot jerseys into Paris.

Their Danish spearhead Jonas Vingegaard retained the race lead by 3 minutes 21 seconds, albeit losing five seconds to Tadej Pogacar as there were some splits in the bunch on the approach to the line.

Pogacar, determined to show himself after losing time in the Pyrenees, had briefly attacked when Wright, Alexis Gougeard and Jasper Stuyven went clear with around 35km to go but it looked like merely a bit of mischievous showboating from the Slovenian and was quickly shut down.

As well as Vingegaard, who also owns the king of the mountains jersey, Jumbo-Visma can also boast the overwhelming points leader - the astonishing Belgian Wout van Aert.

"The priority was to keep Jonas safe today. But when we were five kilometres from the finish, Wout told me, 'this one is for you, I'll take care of Jonas'," said Laporte.

"I got carte blanche."

Stage 20 is a 40.7km individual time-trial, held between Lacapelle-Marival and Rocamadour.

On Sunday, the cyclists will pedal into Paris, as the 2022 Tour de France will end on the iconic Avenue des Champs-Elysées.