Jesús Herrada triumphs on stage seven of the Vuelta a España

Stage 7 of Vuelta a Espana was a day with a lot of drama, as the peloton fought hard to reel back the breakaway unsuccessfully. The breakaway succeeded, with Jesús Herrada timing his sprint perfectly and taking the win in Cistierna 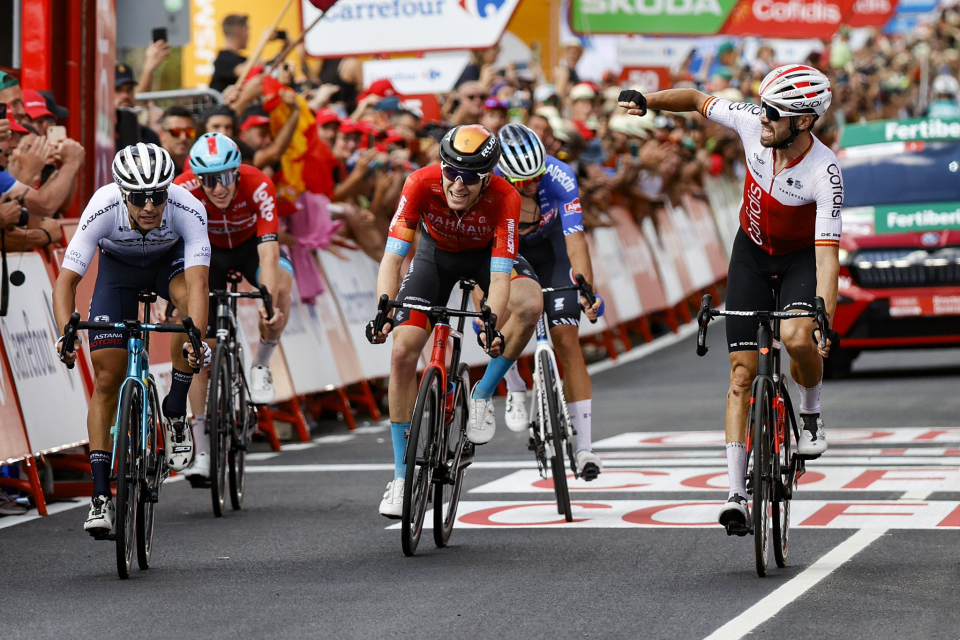 The first 100km were fairly flat until the break hit the 1st cartegory climb of the Puerto de San Glorio almost half-way through the race.

Omer Goldstein (Israel - Premier Tech)  struggled on the climb in the breakway. Herrada took the maximum KOM points, ahead of Wright, Janssens, Sweeny and Battistella. They crested the climb with a lead of just over 2m 30s.

Behind Trek - Segafredo and Team BikeExchange put in a big effort in the peloton to break up the peloton on the climb, with some success, as Sam Bennett and several others were distanced towards the summit.

With it downhill most of the way for the final 60 km, the 5 remaining breakaway riders worked together to stay away as Arkéa and BORA helped to chase the breakaway down in the peloton.

Alas, it was to no avail, with 5 km to go the five breakway riders still had a lead of 50 seconds.

Fred Wright was the man to beat, he started his sprint first, in the final meters Jesús Herrada and Samuele Battistella came around Wright just before the finish line with  Herrada narrowly Battistella with Wright in third place.

Behind in the chasing peloton, Sam Bennett won the sprint just behind the breakway.

Remco Evenepoel retained the Red Jersey and overall race lead with most of the GC favorites still in the top 10.

The weekend sees stages with mountain top finishes across the Principality of Asturias.

Stage 8 to Colláu Fancuaya is 154 km long and features over 3,300 metres of climbing over four climbs before the unprecedented ascent of the Colláu Fancuaya.