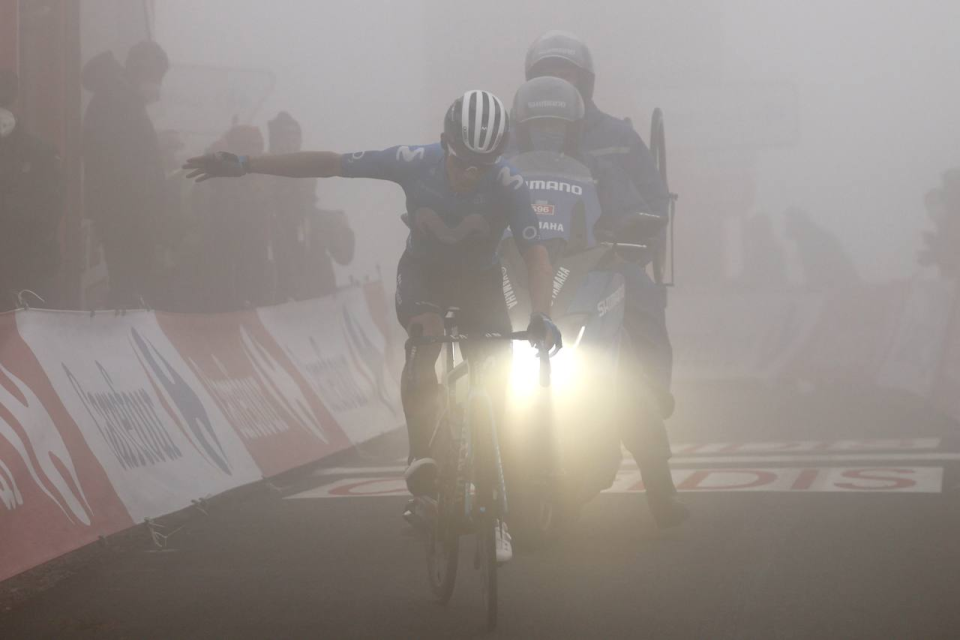 The new brutal sister "evil sister" of the other gruelling climb in the region, the Alto del Angliru (12.5km at 10.1%), the Altu d’El Gamoniteiru made its professional cycling debut as a mammoth task for riders, with the gradient never dropping below 10% on the journey to the summit.

The Colombian, who started the day third overall, rode away from the pack on the hors-category Altu D'el Gamoniteiru to secure a solo triumph and all but ensure he will also finish on the podium on Sunday in Santiago de Compostela.

Slvenia's Red Jersey holder Roglic finished the stage in second place, 14 seconds behind Lopez and six seconds ahead of Lopez's team mate Enric Mas, who is second in the overall standings and came third in the stage.

The brutal 162.6 km stage saw plenty of breakaways and attacks with Australian Michael Storer (DSM) distancing himself from the rest, taking the King of the Mountains polka dot jersey in the process as he hit the final climb first.

The stage was always set to be decided on the slopes of the steep Gamoniteiru, on its Vuelta debut, and so it transpired.

Storer was caught by David De La Cruz (UAE Team Emirates) with seven km to go as the riders rode into the rain and mist.

The Spaniard was then caught by Lopez, who attacked alone from the chasing group to claim a third Vuelta career stage win and a first at this year's race.

Miguel Ángel López said afterwards, “It was a long time for me already since I wanted to win again in La Vuelta. It's been four years since my last success here, and achieving it on the Queen stage makes me so happy. I do this with so much commitment, ambition, and love for my wife and my son. I'm so thankful to my team-mates for their work. We're only five now in the race, and we're missing Carlos, Alejandro and Jacobs so much. However, everyone still here puts a lot of work to make up for the losses. It's been so beautiful to pay the team-mates back for this. The efforts from Imanol, Nelson, Rojillas, Enric… they were magnificent. This means a lot to us. Only those who are here, inside the team, know how hard it is, how much you suffer every day. Without the sponsors, the staff, the soigneurs, sports directors, our manager Eusebio - it wouldn't be possible. This can't be about talking and criticising so much all the time. We offered some good spectacle today, and we go back home with this beautiful victory, so happy about the brilliant work done by all of my team-mates. We also knew this day was important with regards to the GC, we had to take full advantage from it and this will keep us more calm before the next few days heading into Santiago.”

Teammate Enric Mas who is second overall said “I'm so happy, for Miguel Ángel and the whole team, who completed a fantastic job. Imanol was already in the early break, then pushed so hard at the peloton with Nelson, Rojillas took care of us until the last climb - and that attack from Miguel Ángel was great. We knew that, if it was me who attacked, the most likely thing would be Primoz going after me, while Miguel Ángel would be given that sort of margin to go for the stage. Once he jumped, even if I wanted to also try, I had to respect my team-mate and the whole team for their incredible job. We've won this stage and we're leaving so happy with that. Saturday's stage -tomorrow's will also be one to keep an eye at - will be again hard, and anything can happen. We must try and get as much rest as possible tonight, see what happens tomorrow and then think about the weekend."