Two professional World Tour cyclists, Sandra Alonso (Ceratizit) and Jack Haig (Bahrain), reveal some of the secrets from the Gran Fondo Encamp Pas de la Casa, which will take place on September 18, through the landscapes and ports of the Andorran parish. 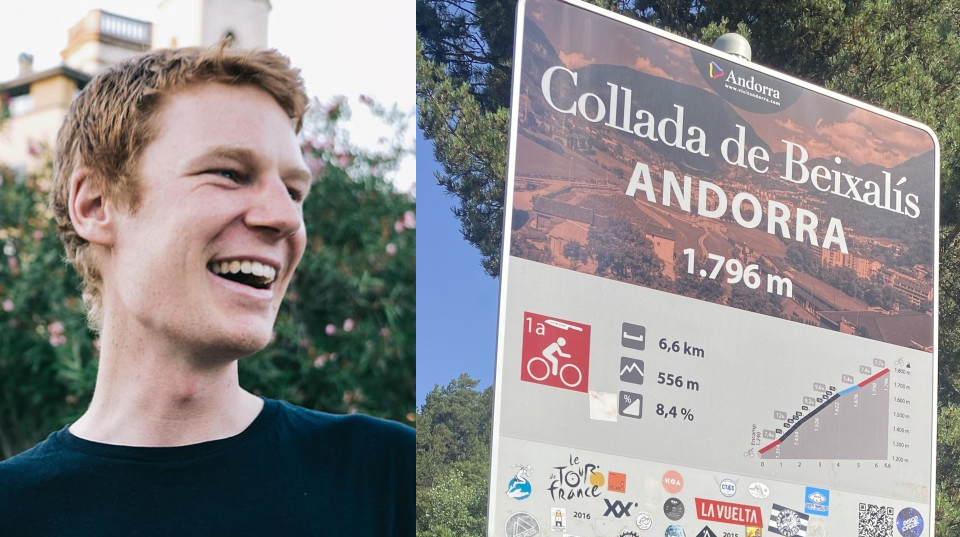 For Sandra "the Encamp area is a paradise, amazing in aspects like landscape and tranquility too. In addition, I love the cycling in the area which you can immerse yourself in, with very little traffic and lotsof cyclists everywhere".

“Here you have the best of both worlds, you can be in Encamp, close to Andorra la Vella, and at the same time, you have big climbs all around you. Through Pas de la Casa you can easily go over 2,000 meters and take full advantage of the altitude” adds Jack.

Sandra Alonso is a young Levantine cyclist, 22 years old, who usually spends several seasons in the area. Tenth in the last Paris-Roubaix, she debuted and finished the recent Tour de France Femmes that has raised so much expectation.

Good connoisseur of the place, for her “the magic corner of Encamp is the top of Envalira. Up there, so high, you breathe stillness, with the valleys below, on one side you see France, on the other Andorra”.

For his part, Jack Haig is an experienced Australian cyclist, resident in Andorra, who finished third in the last Vuelta España. He, who has cycled the same roads as the Gran Fondo Encamp Pas de la Casa a thousand times, and puts his finger on a very specific point of the route. “For me, one of the most beautiful places is the climb to Cortals d´Encamp. Once you pass a couple of houses, the road clears of cars and traffic. At the top, the views are magnificent, with a good part of Andorra and especially the entire climb to Beixalis before your eyes”.

Through the ports of the GF Encamp Pas de la Casa

Entering on the routes, both want to leave us their verdict for the climbs in which they will play, in addition to the honor of finishing, the Gran Fondo World Championship title in the long version.

Starting with Beixalis, Jack Haig places it as “the most recent climb in professional cycling, with appearances in both the Tour and the Vuelta. For me it is the hardest ascent of the GF Encamp Pas de la Casa. It starts with several very hard corners, although after the steepest sections, the landscape opens up and gives you some great views.”

Sandra adds: “It is already a mythical climb among cyclists. We have enjoyed it in Vuelta and Tour. It stands out for being very hard, with very complicated ramps in the first section. That hardness, added to the fact that it is steep at the beginning, invites us to take the rhythm very calmly”.

And a detail that the rider points out: "I really like the initial section of Beixalis, because of the amount of graffiti you see on the ground"

Turning the page, Sandra defines Envalira as “the port of Andorra, the highest of all, and I don't know if it is also in the Pyrenees. The Port of Envalira crosses the entire country. It's a very long climb and that's where its hardness lies, in its length, because of slope, except for two or three steep slopes, it doesn't have much either”.

Jack, for his part, points out the effects of altitude: “In Envalira, the runners will climb to the highest point of the Gran Fondo. At its top of 2400 meters the air is very thin and requires more effort than it seems. The road is long and smooth with a succession of hairpins and beautiful views over the Grandvalira ski area, that will surely make you forget the pain”.

Far from everything, “I love the climb to Els Cortals d´Encamp -Sandra admits-. It is harsh, but above all intimate, there are almost no towns and it seems that you are in the middle of nowhere, entering the mountains. In one of the sections it has a succession of hairpins that make it very plastic”.

As Jack points out, “Cortals is included in three versions of Gran Fondo. Not long ago the Vuelta was around here. On the approach, you have to go through a section of gravel that borders the Engolasters Lake. It will reach the 2000 level and here the cyclist will notice that the air becomes thinner”.

To conclude, the Australian cyclist completes about Ordino: “It is a climb of a certain length, about 10 kilometers, which is distinguished by its constant slope. It begins in the nice town of Ordino, alternating forest with more open areas that allow us to appreciate the town of La Massana, before reaching a much more unprotected part just when we reach 2000 meters of altitude”.

Register NOW and SAVE 20%

Gran Fondo Guide fans and followers, use code: granfondoguide for a 20% discount on registration.

For more information, please visit: https://en.granfondoepc.com or click the button below to register now.