Enric Mas (Movistar) attacked on the final climb, but Primoz Roglic (Jumbo-Visma) powered past in the last 50m in the final of the 11th stage of the Tour of Spain 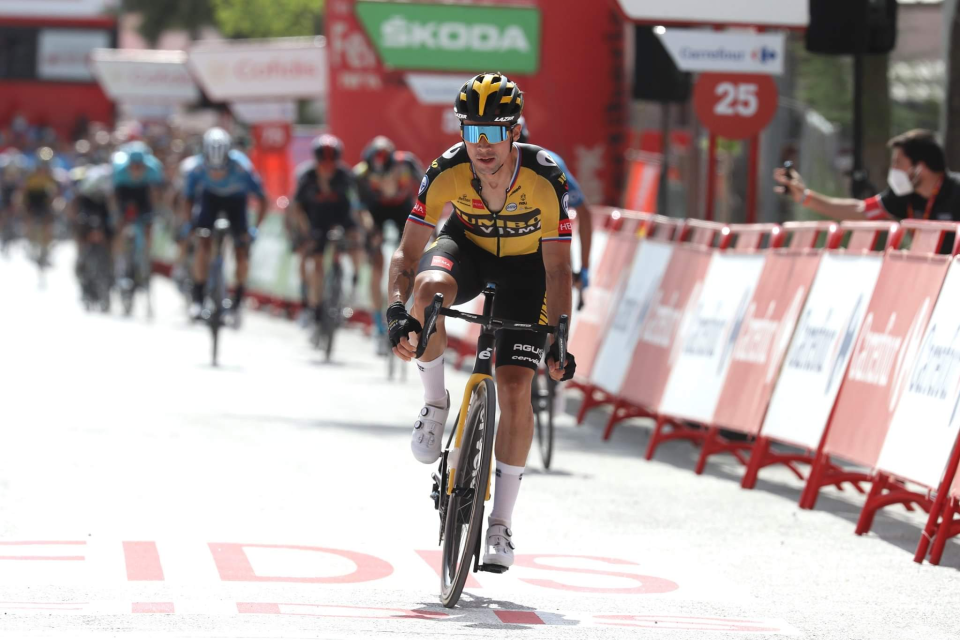 The Jumbo-Visma rider, who surrendered the leader’s red jersey on Tuesday, produced an emphatic attack on the final steep ramps of the 133.6-km stage from Antequera to Valdepenas de Jaen.

Odd Christian Eiking (Intermarche–Wanty–Gobert), who finished 11 seconds behind Roglic, remains in red, 58 seconds ahead of Guillaume Martin (Cofidis) and 1 minute 56 seconds up on the Slovenian stage winner.

Roglic said after his win to the media, "It was close again eh? It was a hard stage. It was short but super hot again. I was also suffering a lot but luckily at the end I had enough for a win. Mas is also really super strong and luckily I had a little more at the end."

"It's always nice to win. You never know when it's the last one. It was a nice finish with a steep uphill where i can normally do well. It was a nice challenge and the team did an amazing job pushing hard all day and keeping the breakaway at a distance so big thanks to them."

Roglic and Enric Mas caught Magnus Cort — who had been in the break for most of the day and held a 16-second lead going into the final kilometre — with 200 metres of the race to go as the slopes touched 24% in the closing stages.

Mas had appeared to be the stronger of the two, launching a number of attacks in the final kilometre until passing Cort, but with 50 metres remaining Roglic surged ahead to claim a statement victory.

The Dane eventually weaved across the line, 49 seconds down on the stage winner after being caught by the chasing group.

Stage 12 of La Vuelta runs from Jaén to Córdoba over 175 kilometres. The finale features the funnily named Alto del 14% before a 10 km descent leads onto 7 flat final kilometres in the third largest city Andaluciá. Could be one for the breakaway specialists.