Magnus Cort Nielsen won stage 12 of the Vuelta a Espana on Thursday on a 175km run through sunny Andalucia, a day after being foiled in a long range bid just 200m from home 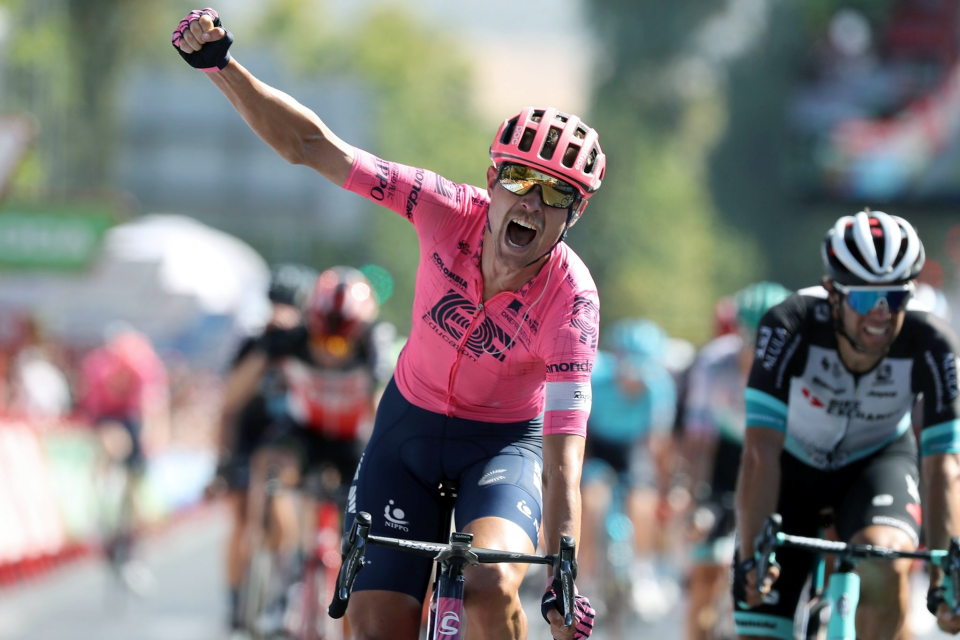 EF-Nippo's Cort Nielsen also won stage six, and beat Andrea Bagioli and Michael Matthews in a reduced sprint after their group had reeled in a four man escape as the race entered the city centre streets of Cordoba.

There was no change in the overall rankings as Norway's Odd Christian Eiking held the lead by 58sec on Guillaume Martin and 1min 56sec on champion Primoz Roglic.

The hilly run was marked by intense heat of 35C (95F) and two falls, one of them caused as around 20 riders simply followed another rider's misjudged line round a corner.

Both Roglic and Ineos' Adam Yates ended up going head-over-heels into the roadside dust and bushes and both took a few moments to brush themselves down.

Riders were shouting and swearing loudly as they realised they were tangled in or had been slashed by a barbed wire fence, with Dylan Van Barle of Inoes the last man to get up suffering intense pain and bleeding heavily from an elbow.

For a while it appeared an escape would again win a stage as a clutch including Romain Bardet, Giulio Ciccone and Sergio Henao fought to dispute the finale.

But Matthews' Australian team Bike Exchange led the charge to reel them in only to see the Cort Nielsen, who had kept his head down all day, suddenly move up the field and outpace everyone.

"I was able to rest at the back early on while there were escapes going on," said the Dane, who won his fifth Vuelta stage here.

"I could still feel the force from yesterday, that and a bit of luck did it," he said.

Friday's run is an almost entirely flat 204km run from Belmez to Villanueva de la Serena in the centre-west region of Extremadura, which borders Portugal. So Green sprint point jersey wearer Fabio Jakobsen will be the man to watch there.

The weekend however could see a change in the overall lead and even a shake up in the overall standings as it provides two huge mountain challenges with two category 1 climbs on both Saturday and Sunday.