Roglic dominates in mountains to take back the Red Jersey 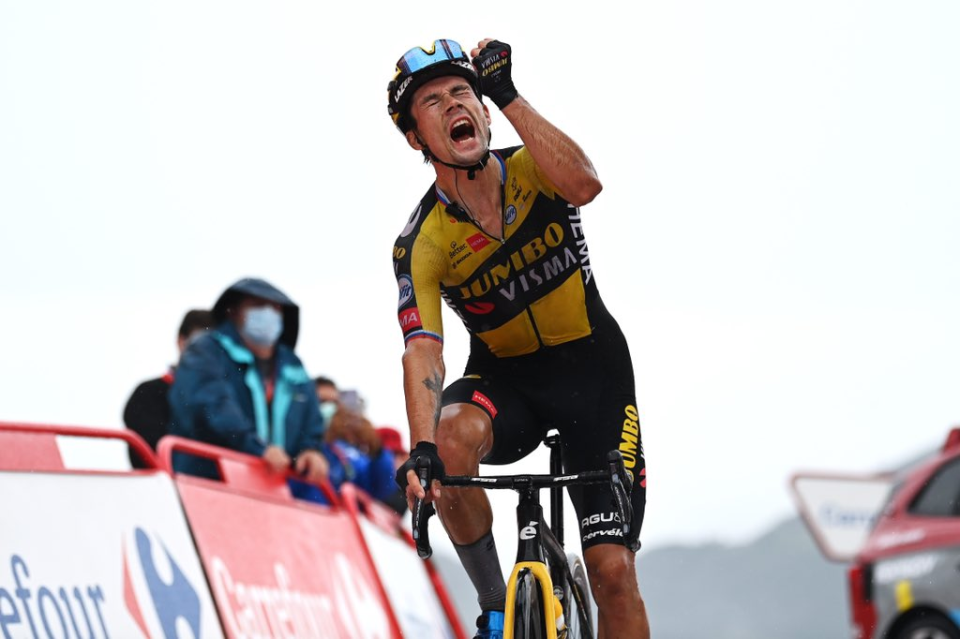 The Slovenian, who began the 17th stage third overall, won after a 185.8km ride when the peloton covered three intimidating climbs in often pouring rain.

"I went well today," said Roglic. "I enjoyed it. Super-nice day for me and for the whole team.

"Without the rain it would have probably been even nicer."

By the start of the final climb only Egan Bernal, the reigning Giro d'Italia champion and a former Tour de France winner, was still with Roglic.

But Jumbo-Visma's Roglic ended the heavyweight battle with one knockout blow, accelerating away from the Colombian with 7.5km to go.

"I didn't decide to go, I just tried to ride up the climb as fast as possible and at that point Egan couldn't follow anymore," said Roglic.

Bernal admitted the better man had won the stage.

"I was happy to be part of this victory for him, he was brave," Bernal said. "He was the strongest today."

While Roglic floated up the mountain, Bernal was unable to hold off his pursuers.

"Impressive day by everyone in the race," said Kuss, soaking wet but beaming at the finish. "Full on all day."

"Never big enough," said Roglic of his lead. "It's nice."

Another Movistar rider, Miguel Angel Lopez, is third, a further 49sec back.

Bernal, the Ineos-Grenadiers rider who started the day in seventh, attacked on the Collada Llomena, the penultimate climb of the day, with 61km to go.

The two rivals worked together to build a gap to the peak and then both continued to press on the slippery, treacherous roads.

"It was already a hard pace and when Bernal went it was blown apart," said Kuss. "It was a brave move to go so early."

The Norwegian sped round a corner to see three riders on the ground and grabbed his brakes, lost control, and slid across the road to join the pileup.

Frenchman Guillaume Martin of Cofidis, who started the day in second, kept up the chase a little longer before fading on the final climb.

Australian Jack Haig of Bahrain Victorious finished with Kuss to jump to fourth and said he was focused on his rivals for places on the lower steps on the podium.

The Vuelta faces an even tougher ride Thursday on what Roglic dubbed "The Queen Stage".

It runs 162.6km from Salas over a second-category climb and two first-category climbs before finishing with an hors category ascent up to Altu Del Gamoniteiru.