In true Granfondo style two Italians won the GFNY Gran Fondo in New York today after a two year hiaitus due to the global pandemic. The anniversary edition had 6,500 riders from over 90 countries registered for the race. And after 103 miles with 8500 feet of climbing were battled out on the roads of New York and New Jersey. 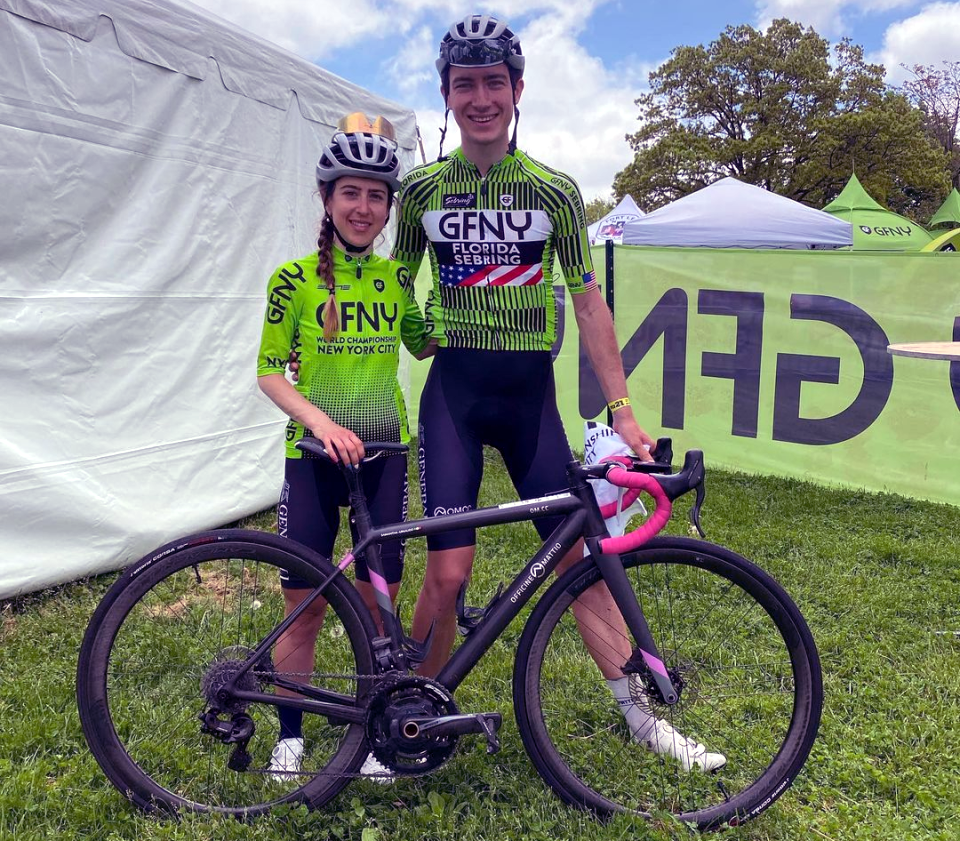 The Gran Fondo NY race rolled through the New York today. Riders from over 90 countries hammered for 103 miles. Elite riders averaged 25 miles per hour and finished in just over 4 hours.

The start of the Championship is always fast but it wasn’t until the climb at Alpine Hill that Italian Fortunato Ferrara, GFNY Santa Fe champion, attacked and was soon joined by Americans Conor Pulvidente and Nick Wheatley-Schaller as the race turned onto route 9W. By the time the trio approached Bear Mountain at mile 40, a large pack of 60 racers was nearly five minutes behind.

Wheatley-Schaller suffered the fate of so many other ambitious riders, cracking on the ascent of Bear Mountain. Ferrara topped Bear first, and Pulvidente fell back, but the chase group of thirteen was getting closer. On the way to Gate Hill at mile 60, it was just Ferrara braving it alone in front, with the ravenous pack bearing down only two minutes behind.

At the approach to Cheesecote at mile 65, two other Italians, Luca Vergallito of Officine Mattio Cycling Club and Swatt Club’s Mattia Gaffuri, launched off the front of the chase group, eventually joining their compatriot near the Pomona Aid Station. Both youngsters just come off a career as young pros with Giro d’Italia U23 under their wings. The trio worked together until the NY/NJ State Line Climb, when Ferrera’s valiant earlier blitz finally caught up with him.

It was down to the final two, as Vergallito and Gaffuri sped back up River Road. The chasing group couldn’t get organized, watching their chances fade as the two Italians kept up the furious pace.

With 150m to go on Fort Lee’s Hudson Terrace, Gaffuri opened the side by side uphill sprint but it was Vergallito who had more left in the legs and took the GFNY World Championship crown in 4:17:52.

With Francesco De Candido Romole in fifth, Matteo Draperi in ninth and 2017 champ Ricardo Ricco in eleventh, Italy had a whopping 6 riders in the top 11.

Omar Azzem dominated the GFNY races in his home Uruguay and showed with his sixth place that he was no fluke, winning the sprint against Felipe Aros Plaza of the neighboring Chile.

Camilo Salazar of Ruta 56 was best Colombian in “only” 8th place, surely a disappointment for his country, representing with over 800 riders and always in top spots at the championship. But the Colombians didn’t miss a beat and celebrated the race like no other at the GFNY Finish Village.

GFNY’s own Flavio de Luna (Mexico) rode aggressively all day but – in his own words – “ran out of gas” at the end, not having trained enough or raced at all yet this year. A 10th place is impressive, considering he worked all weekend for the GFNY video production.

Nick Wheatly Schaller was first American in 16th place. He raced offensively and showed himself out there with a great early performance. This should spur more of his compatriots to put the stars ‘n’ stripes further up in the mix for the 2023 championship crown.

Defending champion Jill Patterson had been busy racing GFNYs on several continents, bringing home a win from Ecuador and several podium finishes. If a rider wanted the 2022 crown, she first had to take it from her.

And so Italian Samantha Arnaudo (OM.CC) did, leading the race start to finish in dominating fashion and crossing the line in 4:42:24. In second was German pro Hannah Fandel, three minutes back. Patterson rounded out a world class podium in 4:47:38.

Arnaudo from northern Italy (near Turin) attacked on Bear Mountain to solo as the only female to the finish line. She recently won the 2022 Gran Fondo Torino in Italy and the 2021 La Granfondo Fausto Coppi.

Over 6,500 riders took part in this year's race with around 60% of the riders chosing to ride the Gran Fondo, and the rest the shorter, but no less challenging, 45 mile Medio Fondo.

Sign-up now to get notified when your personal photos and video will be available in the next few days: https://www.sportograf.com/en/event/8019

The next GFNY World Championship will take place on May 21st 2023 and registration is now open   https://nyc.gfny.com/register2023.