There was no lack of drama on the sixth stage of the Vuelta a Espana, the first serious mountains and harsh weather conditions opened up some massive gaps 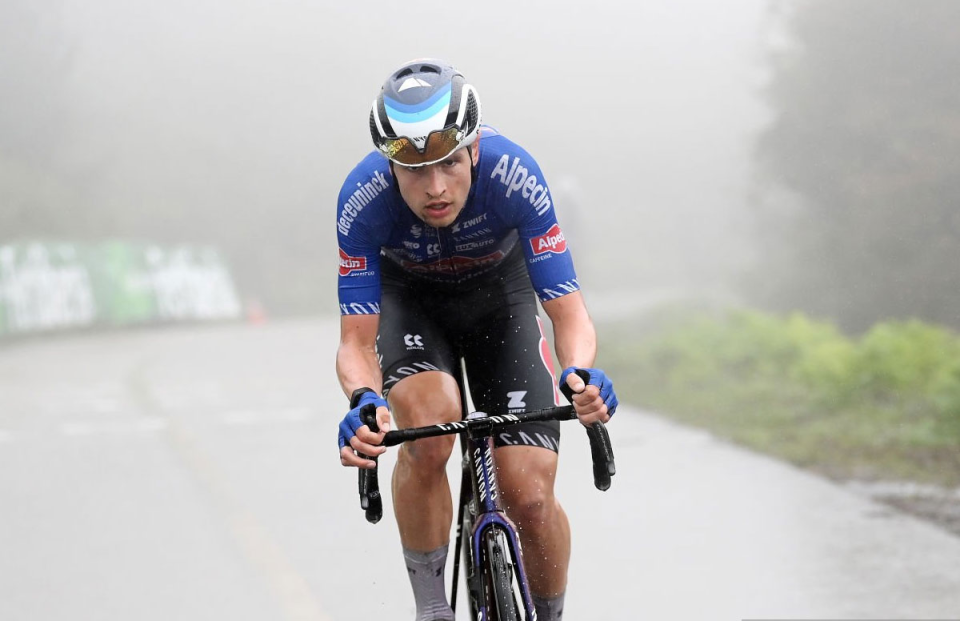 Jay Vine took a surprising win by attacking on the final climb, holding off the GC favorites who had a full on battle behind.

Remco Evenepoel also attacked the peloton to jump into the red jersey, as Primoz Roglic struggled on the final climb.

Ten riders went up the road in the breakway in what was a severe change of weather, from the harsh heat of the Spanish summer to cold heavy rain rain and low cloud.

The breakaway did not get much freedom as Groupama - FDJ looked to keep things compact early in the day, however Rudy Molard struggled on the penultimate ascent of the day and lost the race lead.

In the breakaway, Mark Padun attacked on the penulitimate climb, struggling on the wet and technical descent.

The final climb would then see a lot of fireworks. Padun was caught with 6.5 kilometers to go as some attacks early in the climb saw Jay Vine pass Padun and press on.

The Australian soloed away as Remco Evenepoel detonated the race behind in the GC group leaving only 30 riders left in the peloton on the final climb.

Several riders struggled, Mikel Landa and Richard Carapaz early on, and so did Primoz Roglic, as Evenepoel and Enric Mas pushed the pace incredibly hard in the first half of the final climb of Pico Jano. The GC race settled down with the duo taking time, and Jay Vine keeping his lead.

The Australian held off Evenepoel and Enric Mas in impressive fashion, taking the biggest win of his career.

Behind, Remco Evenepoel sprinted to second place alongside Enric Mas in third, taking over a minute on Primoz Roglic who arrived wth the rest of the GC contenders, with the race blown to bits.

Evenepoel took enough time on the competition to jump into the race lead.

GC favorite Richard Carapaz lost a lot of time and is 2m 56s down in 19th place overall.