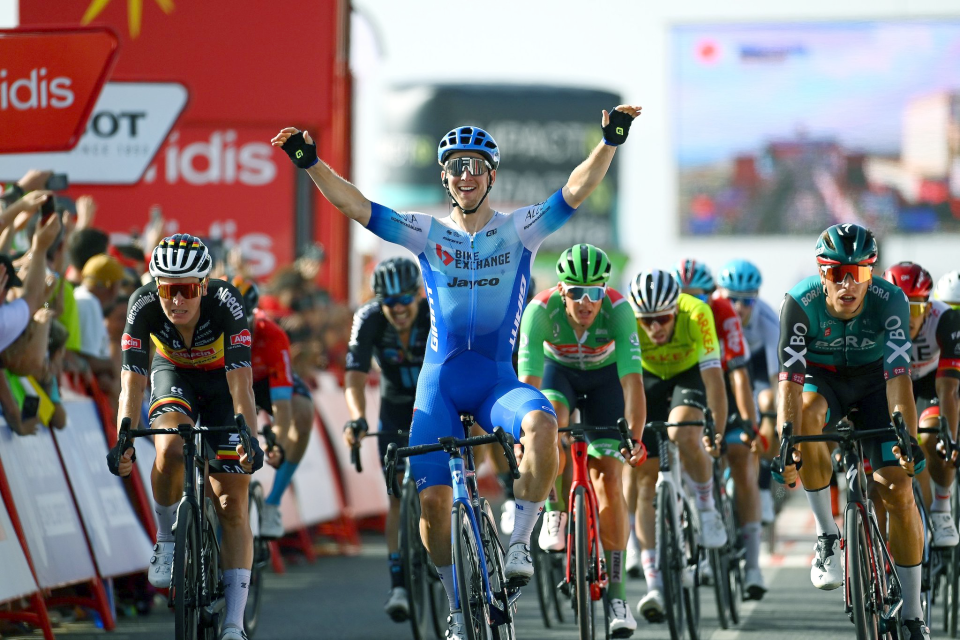 The 23-year-old BikeExchange-Jayco rider perfectly timed his burst after the 191.2km run to Cabo de Gata, team-mate Simon Yates was one of five riders to withdraw after testing positive for COVID-19.

World Road Champion Julian Alaphilippe abandond the race following a heavy crash, he was taken to hospital with heavy strapping on his shoulder. The Frenchman flew over his own handlebars after crashing into one of his Quick-Step team-mates, with 70 kilometres to go on the windy Andalusian coast to Cabo de Gata. He was due to defend his rainbow jersey in Wollongong, Australia, on September 25th.

His retirement is a blow race leader Remco Evenepoel, 22, from Belgium, who retained his two minutes and 41 seconds advantage over Slovenia's Primoz Roglic.

"It feels fantastic to win. This morning, with news of Simon Yates testing positive for COVID-19, all the boys were disappointed but this is the best way to bounce back," said Groves, who is riding in his first Grand Tour, "I wish he was still here with us, but I am super happy to get my first Grand Tour win."

Team BikeExchange-Jayco said the 2018 Vuelta winner Simon Yates suffered a "light fever and body aches" overnight and was withdrawn "with rider health and wellbeing our priority".

Pavel Sivakov, of Ineos Grenadiers, ninth overall was also out of the running including three riders from the Kern Pharma team; Roger Adria, Hector Carretero and Pau Miquel Delgado dur to COVID-19.

Stage 12 to Peñas Blancas. Estepona is a completely flat day until the Peñas Blancas climb, a very tough finale that may make important changes to the general classification after 195 km.