Richard Carapaz made up for a difficult first week at the Vuelta a Espana, to take the win on the summit finish of Peñas Blancas on Stage 12 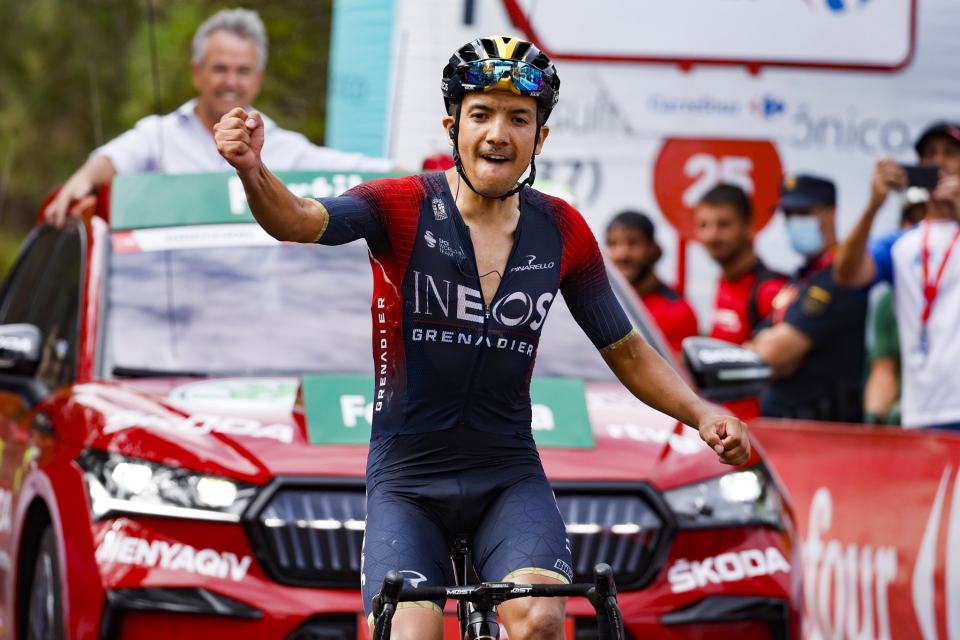 With the three top teams down to few support riders due to COVID, the breakaway had high chances of succeeding on today's mainly flat stage.

Eventually a group with a total of 32 riders went up the road, the only threats being Wilco Kelderman and Jan Polanc 15 minutes down Remco Evenepoel's lead.

The gap grew to around 6 minutes, Remco Evenepoel come down in the peloton and looked very frustrated, blaming a moto support for the crash. He looked to have shredded his kit and suffered some cuts and bruises.

In front the breakaway reach the final climb to the finish line with 10 minutes lead, Matteo Fabbro led almost the entirety of the climb to help Wilco Kelderman's GC ambitions.

Élie Gesbert started the decisive attacks which split the breakaway down to just four riders.

Richard Carapaz was however the best of them, attacking inside the final two kilometers opening up a big gap.

Wilco Kelderman finished in second place on the stage, helping him move up to sixth on GC, as Marc Soler brought himself back up to third place on GC.

Behind, Jumbo-Visma and Movistar set the pace early on the final climb. Enric Mas attacked twice to drop Belgian race leader Remco Evenepoel but to no avail, Miguel Ángel López being the only other rider able to respond to the first move.

Evenepoel took over the pace setting in the final two kilometers, and led a small GC group across the finish line.