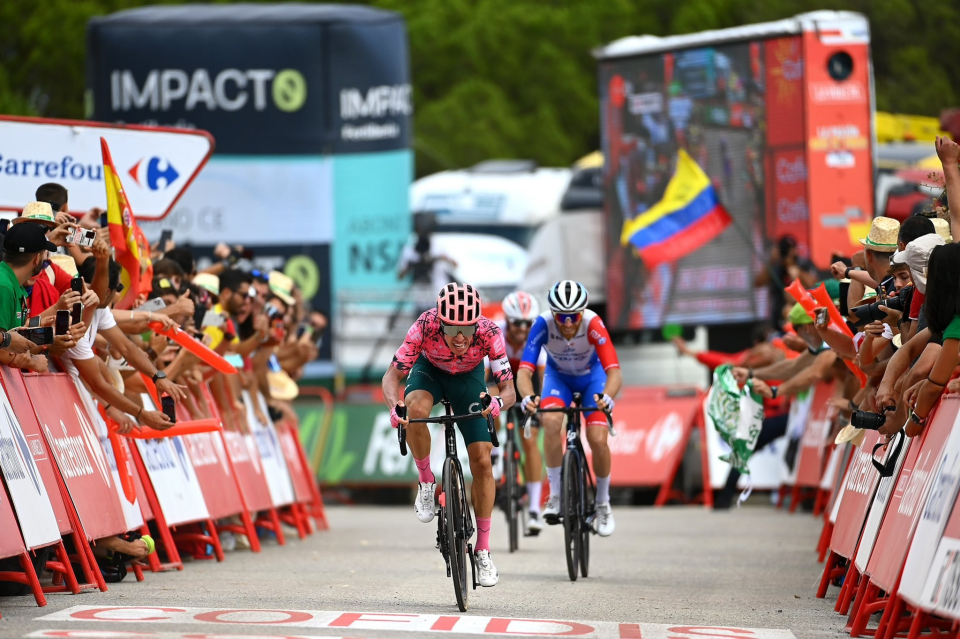 The big news of the day was Primoz Roglic abandoning the race following the injuries sustained in yesterday's high speed crash. Primoz Roglic's crash on the 16th stage proved too much to continue the race, and the leader of Jumbo-Visma abandoned the race.

Fatigue has started to set in some more riders aswell, Bryan Coquard and Filippo Conca did not take to the start of stage 17 - the latter because of Covid-19. Rein Taaramäe left the race early on in the day aswell.

The peloton let the gap grow to nearly 7 minutes, with the win certain to come from the breakaway, no one including Quickstep were concerned even with 11th placed GC Urán up front.

The attacks in the breakaway started in the final 30 kilometers with Lawson Craddock repeatedly attempting to get away, eventually the American attacked alone and started the final climb with a slim advantage of13s.

Before the final steep four kilometers Urán, Gesbert and Champoussin attacked to catch Craddock, but the gap remained in the final 3 kilometers as Soler, Herrada and Elissonde bridged across to the trio.

With a kilometer to go Urán and Herrada caught Craddock, but the attacks kept on coming. Herrada made a move which seemed decisive but Urán countered a got  gap, the Colombian managed to take the win, beating Quentin Pacher and Jesús Herrada.

Behind, Movistar Team set up a move for Enric Mas, however with Remco Evenepoel promptly responded.

João Almeida took advantage and attacked the pair to take some seconds on his rivals.

Evenepoel led the rest of the GC group into the finish, having contained the other attacks.

Stage 18 from Trujillo to Alto del Piornal will be a tough and very beautiful stage. This will be a day for the favourites and their teams to work on their strategies if they want to shake up the general classification.