He was an outsider for the win. He quietly waited. And his patience paid off.

Jasper Stuyven timed his winning move perfectly, jumping away from a group of favorites and fast finishers at the bottom of the Poggio. The favorites hesitated, eyeing each other out of the race, and Stuyven powered away to the biggest win of his career.

“I just knew I had to try, all or nothing. I prefer to do this than gamble for the sprint and finish in 5th or 10th place, so I prefer to go all-in.  Most of the time it’s nothing; sometimes it’s all, and today it was all. It’s incredible. I don’t realize [what I’ve done] yet. I am just incredibly happy,” said Stuyven.

One rider managed to bridge to his wheel from the group. When Soren Kragh Andersen (Team DSM) came across, it actually helped Stuyven.

With the group in a full-on, desperate sprint behind him, Stuyven gave everything. “And then I started the sprint,” continued Stuyven. “I had nothing left in the legs, but it was enough.”

Stuyven even had time to throw his arms high, punching the air for the grandest finish line celebration of his career.

“To be honest, there were a lot of fast guys in the group at the bottom of the Poggio, and I had the instinct that I know if I can find the gap, it’s my strength that I can have a good finale. They were hesitating and I took a lot of speed in the last part of the downhill from the Poggio, and that was only instinct,” added Stuyven.

“I was not going to go to the line with all these fast guys because you never know what you get. I actually said to a friend of mine that I was going to go all-in – all or nothing. There was no one with a teammate and that was also in my advantage. It was nice to find the moment and immediately have the gap and then just empty the legs to the line.”

The Belgian got a gap, Søren Kragh Andersen (Team DSM) came across to him but Stuyven kicked again in the final 100 metres to hold off the chasers and win with his arms in the air. Caleb Ewan (Lotto Soudal) just failed to catch him on the line and finished second, with Wou van Aert (Jumbo-Visma) third, Peter Sagan (Bora-Hansgrohe) fourth and Mathieu van der Poel (Alepcin-Fenix) fifth. 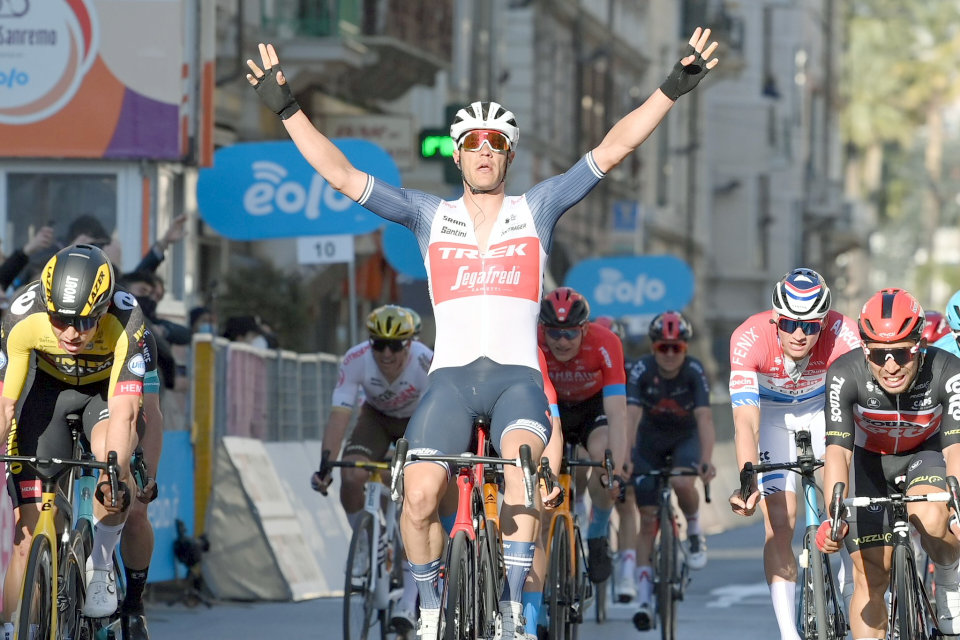