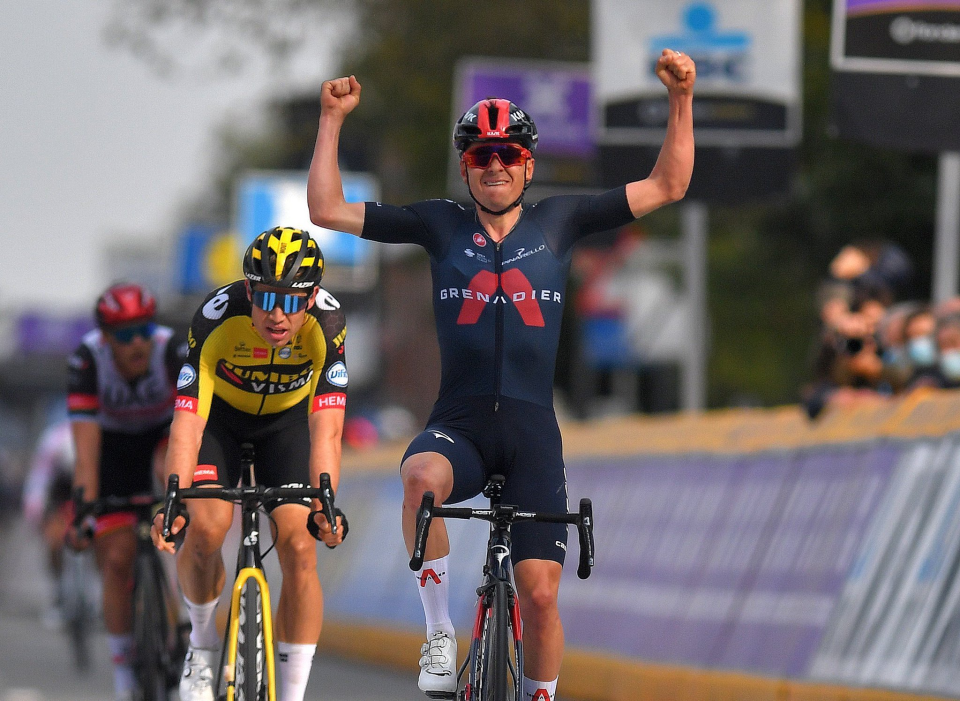 “I waited and waited and when Wout went, I kind of got a little boxed in and then rushed and came past him,” Pidcock said, “Beating Wout van Aert in a sprint was a surprise, but luckily for me he went early,” he added.

Pidcock has already put in some credible performances, 5th at Strade Bianche and 3rd at Kuurne-Brussels-Kuurne this season.

Pidcock, Van Aert and Trentin dropped the other contenders on a narrow, cobbled climb 37km from home before dueling.

Matteo Trentin attacked the front group of 16 riders on the finishing circuit with less than 30km to go. With 15km to go he was joined by Wout van Aert (Jumbo-Visma) and Tom Pidcock (Ineos Grenadiers).

“I know that sprinting at the end of races like that is not like sprinting for a town sign — I always go into a sprint with confidence,” said the British rider “I waited and waited and when Wout went, I kind of got a little boxed in and then rushed and came past him.”

The chase group lead by Benoit Cosnefroy (AG2R-Citroën) nearly caught the three leaders, forcing them to open the sprint early with 400m to go.

“It was a fair fight in the leading group of three. All day long, I had the idea that Tom was better than me, especially on the climbs. In the sprint, my legs were unfortunately just full, and I saw Pidcock come past me,” said van Aert.

Pidcock looked to be suffering on a climb inside of 30km to go, but was able to reconnect with the chasers.

Pidcock tucked in behind van Aert, and launched his sprint with less than 100m to power round Van Aert with Trentin holding off the chasing group.

“I felt good today but the legs were a bit tired in the end and the strongest guy won. I look forward to coming back racing on these roads at the World Championships later in the year,” Trentin said.