Julian Alaphilippe cracks all his rivals on the Mur de Huy 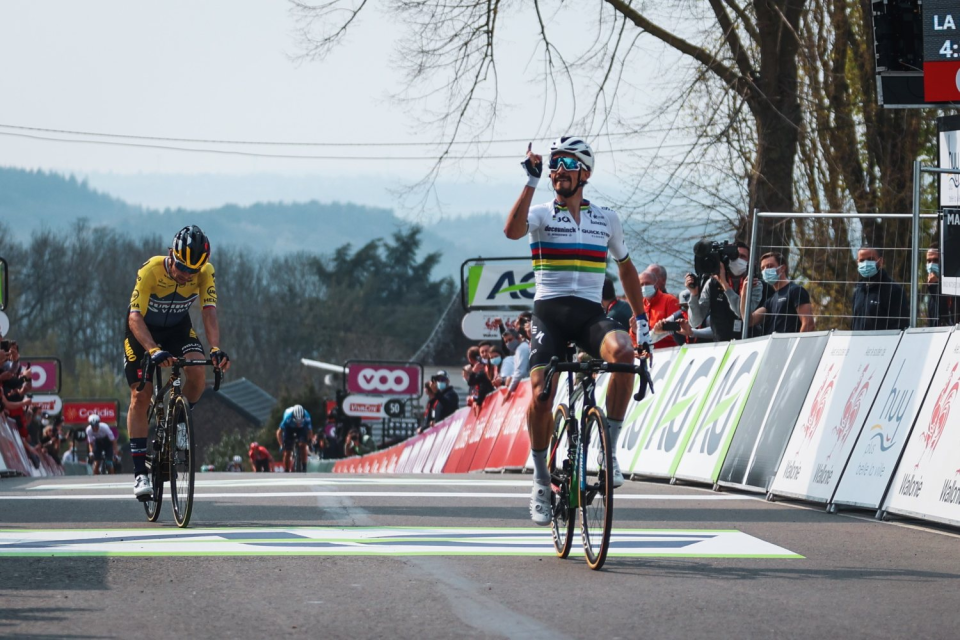 With the reminants of the day's breakaway caught at the bottom of the final climb, Roglic attacked with about 350m to go on the famous wall of the Mur de Huy, and quickly opened up a gap.

Behind, five-time winner Alejandro Valverde (Movistar) and Alaphilippe counter-attacked. But Roglic ran out of gas in the final 100m and the world champion flew past, Valverde crossed the line third.

That's Alaphilippe's third straight win at Flèche. He didn't take part last year following his Worlds title. He won in 2019 and 2018, missed the race through injury in 2017, and was runner-up in his first two appearances in 2016 and 2015. Not a bad track record.

Alaphhilppe said to the press afterwards ""I just wanted to show I had a strong head. Since the start of the season I haven't won a lot, and that didn't stop me having fun, but I really wanted to raise my arms again. At a race as hard as this, voila. I put some pressure on myself - not pressure, but I wanted to win again.

"The team did a great job today and I'm really proud of them. I had huge confidence in them and was well placed when I needed to be. Mikkel Honore dropped me off at the bottom of the Mur in the first positions, and in the end I knew what I had to do. It's the legs that make the difference on the climb. It wasn't easy with Roglic out front and Valverde on my wheel but I got there. It does my an enormous amount of good to win, especially in the jersey. I'm really happy."

A dismayed Roglic said "Julian was definitely the strongest. Congrats, he deserves to win. "I was just there and attacked early. If I had a bit stronger legs I would win but someone was better today, and congrats Julian. "It was a nice race, it went fast and for sure I'm happy with the shape going into Liège. You always want to win but I'm just happy with my level and definitely looking forward to Liège."