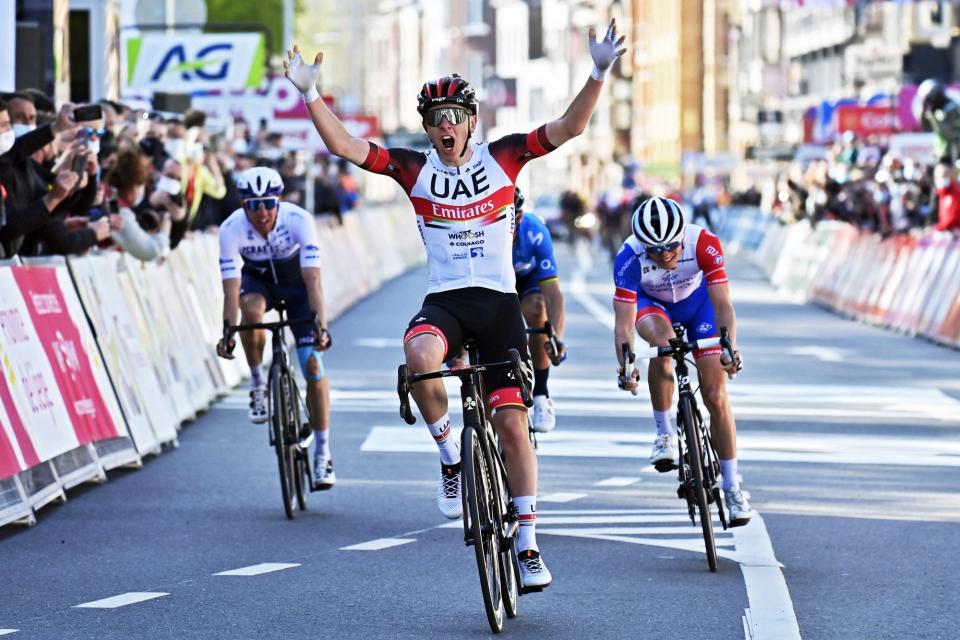 The pair had been part of a five-man group who broke from the main pack on the day's final climb, with 13km left of a 256km slog over 11 tough climbs in the Ardennes.

Slovenia's Pogacar, Frenchman Alaphilippe and his compatriot David Gaudu, Canada's Michael Woods and the 41-year-old Spaniard Alejandro Valverde managed to get away from the rest of the peloton atop the Roche-aux-Faucons climb.

It was then a cat-and-mouse affair across the lush fields outside Liege, with the veteran Valverde and Alaphilippe known as the fastest sprinters.

Valverde broke for the line early and was overhauled by Alaphilippe and Gaudu with 50 metres to go, before the 22-year-old Pogacar showed fresh legs, coming round from the back at lightning pace to grab victory right at the line.

"I sat on Alaphilippe's wheel in the run-in. I knew he could go for it from distance and I just managed to get him," said Pogacar who won the 2020 Tour de France with a penultimate-day assault.

"I love this race," he said of Liege-Bastogne-Liege, the oldest of the 'Monument' one-day races.

Before the final climb, British outfit Ineos almost staged a coup by attacking from the Cote de la Redoute from over 30km out, as 2019 Giro d'Italia winner Richard Carapaz opened a gap after fine work from Tao Geoghegan Hart and Adam Yates.

But the Ecuadorian was caught outside Liege as Pogacar's UAE Team Emirates set up the winning move with a sudden attack of their own.

The women's 140km race runs from Bastogne to Liege and takes in seven hills along the same narrow and winding Ardennes forest roads as the men, where it is notoriously difficult to keep track of the race.