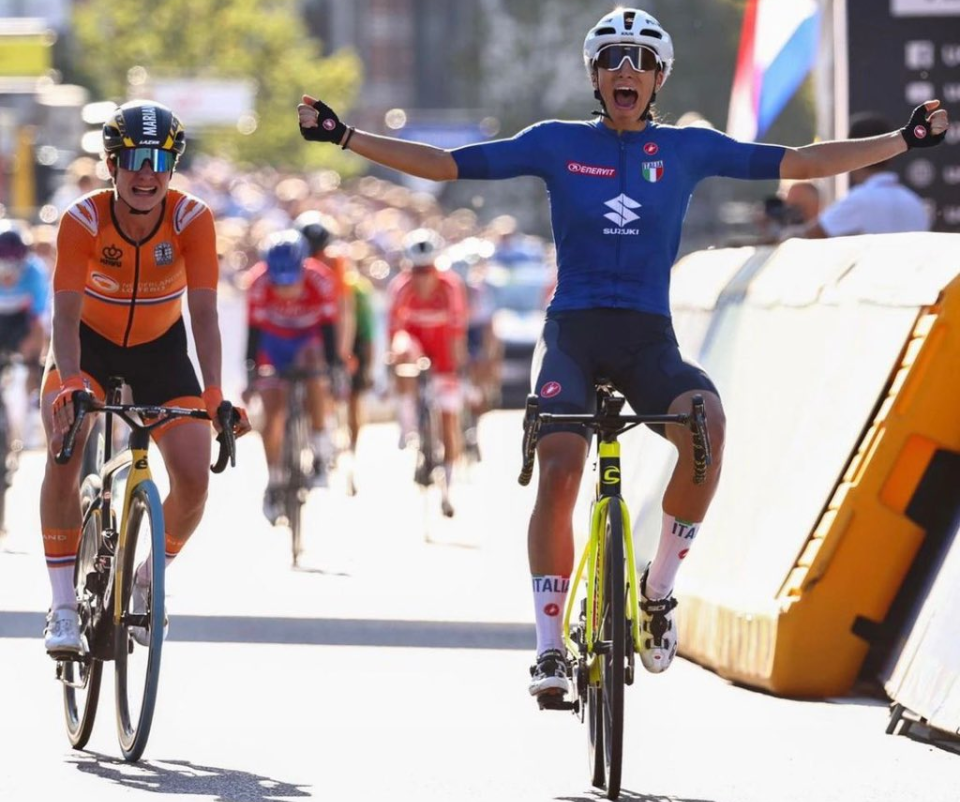 The 23-year-old held off a challenge by the Netherlands' three-time champion Marianne Vos to take the rainbow jersey after a gruelling 157.7 kilometres ride under clear blue skies.

Balsamo crossed the line with her arms spread wide in celebration as she became the first Italian to win the title since Giorgia Bronzini won the second of her two titles in 2011.

For the star-studded Dutch team it was a second high profile failure to guide one of their own to the title having been outfoxed by Austrian amateur Anna Kiensehofer in the Olympic road race in Tokyo.

Little wonder that as Vos cried after crossing the line, Balsamo thanked her team-mates for the work they had done to secure her victory.

"I'm totally speechless, I have no words to describe this feeling," she said.

"It's unbelievable. My team was so good. Without them this jersey wasn't possible so my team were so good.

"My team made a perfect lead out, I really believed in them and after the last corner I only switch off my brain and say 'you have to go full gas.'

"I think that I need some days to realise today... it's a dream."

Balsamo had opted to compete in the track cycling in Tokyo and she was dumbstruck to have got the better of the cycling great that is Vos.

"Can you believe that I beat Marianne Vos today? It is crazy!" said Balsamo.

"To think I will wear this jersey next year (the rainbow one awarded to world champions).

"All this is barely credible. My boyfriend is on the finish line, my family are following me at home.

"I am really pleased to have brought them such joy."

The best of the rest of the Dutch team was Demi Vollering who finished seventh despite having trouble during the race and replacing her bike.

There was to be no fairytale championship ending for two-time champion Anna van der Breggen.

She got caught at the back of the peloton when it split into two and the 31-year-old 2016 Olympic road race champion was never able to make up the difference.