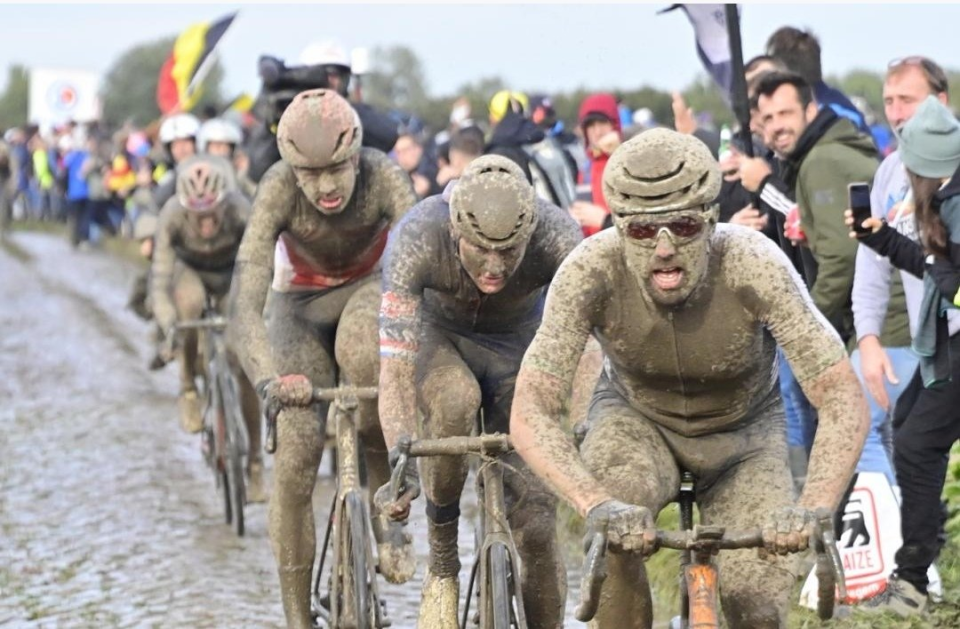 Florian Vermeersch was second and Mathieu van der Poel  rounded out the podium with second and third in a three-up sprint coming into the Roubaix velodrome.

“Unbelievable!” he said. “My first Paris-Roubaix, I am very happy, Today was a legend of a Roubaix with the rain in the start. I follow all the moves in the final, and I could do my best sprint. I am so happy for this victory.”

Neither had even started Roubaix before Sunday, and all three rode onto the podium.

The victory is the first by an Italian since 1999.

Gianni Moscon punctured then crashed out of a promising lead, and was caught on the decisive Carrefour de l’Arbre sector with 15km to go.

The Italian was leading by more than a minute before luck turned against him, and he rode into the velodrome in a bitter fourth.

While the parcours was fairly flat from start to finish, it was the thirty sectors of pavé, with their potential for creating crashes and splits on even the driest days that would weigh heavy in the riders’ minds – and the late-season slot meant that rain had soaked the course to make the first wet edition of the race in nearly twenty years. Timing and luck is everything at this race, and multiple attempts to attack to create an early advantage came to little at first, before a large group went out ahead after more than 40km of the day had been ridden.

The cobblestones started having an effect early on, with the peloton splitting into three and Daniel being shed from the break, who returned to support his teammates in the main bunch, while the head of the break started to split into smaller groups as the roads narrowed and more and more crashes on the wet pavé created splits. Caked in mud and soaked to the skin, few riders were able to avoid crashing or being caught up in crashes, with both Peter Sagan and Maximilian Schachmann coming down, the Slovak national champion’s fall with 135km remaining making it even tougher for him to make his way to the lead group, while in a cruel stroke of bad luck, Maximilian hit the deck with 105km to go just as he had joined a group of favourites.

Moscon went out ahead with 50km remaining, but even he wasn’t immune to the slippery cobblestones, losing his position to the trio of Sonny Colbrelli (Bahrain Victorious), Florian Vermeersch (Lotto Soudal) and Mathieu van der Poel (Alpecin-Fenix)  that would ultimately go on to contest the win.