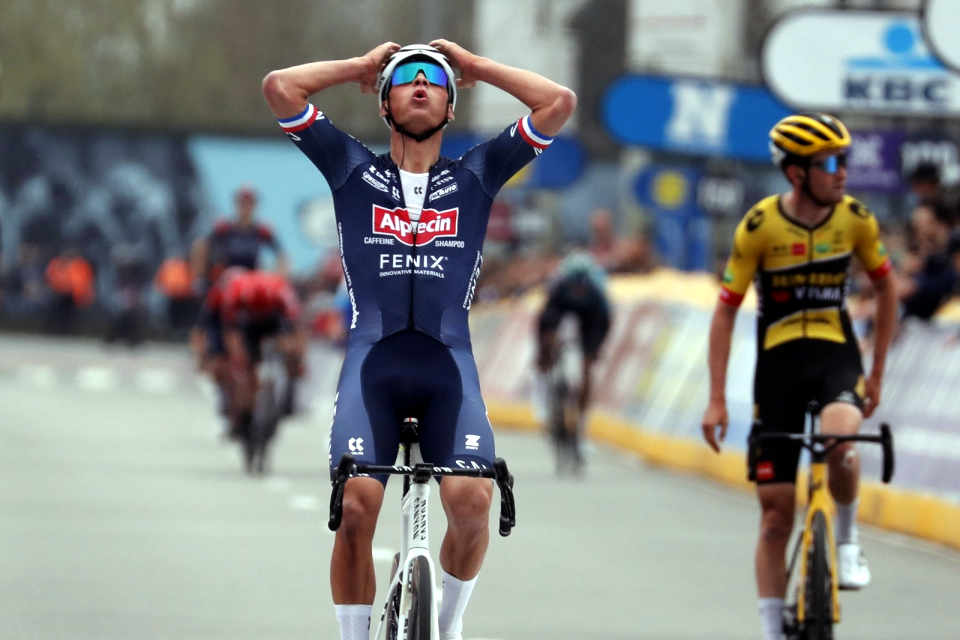 The Alpecin-Fenix rider was aggressive throughout the day, managed to respond to the crucial attacks in the final kilometers and beat Tiesj Benoot in the final sprint.

The day's breakaway included Johan Jacobs (Movistar Team), Nils Politt (BORA - hansgrohe), Kelland O'Brien (Team BikeExchange - Jayco), Mathijs Paasschens (Bingoal Pauwels Sauces WB) and Aaron Verwilst (Sport Vlaanderen - Baloise). The group would eventually benefit from what was an early finale to the hilly section of the race, as they managed to get in the wheel of the attacking group. Nils Politt and Kelland O'Brien resisted as it moved along and pushed over the final climbs of the day.

The group in question attacked at the Beg ten Houte with 69 kilometers to go. Pidcock, Turner, van der Poel, Benoot, Campenaerts and Kung took off from the peloton and collaborated well enough to consolidate the gap over the peloton which slowly split into small groups over the remaining climbs that were left in the group.

The group worked, caught the breakaway dropping everyone but the two riders mentioned above and went on to fight for the win as the pace never dropped down, despite the obvious advantages of Van der Poel in a sprint. Several small attacks came throughout the final hour of racing, however only with eight kilometers to go was there a dangerous move as Victor Campenaerts attacked and riders started jumping across. There was a bridge made, but the Belgian attacked again with three kilometers to go, but it was a move by Benoot in the final two kilometers that proved decisive.

Van der Poel responded and bridged across the gap, and despite leading it out, he easily gapped Benoot in the final sprint, taking his second win of the season. Benoot and Tom Pidcock completed the podium.