Van der Poel, Pogacar, and Asgreen favorites for the Tour of Flanders 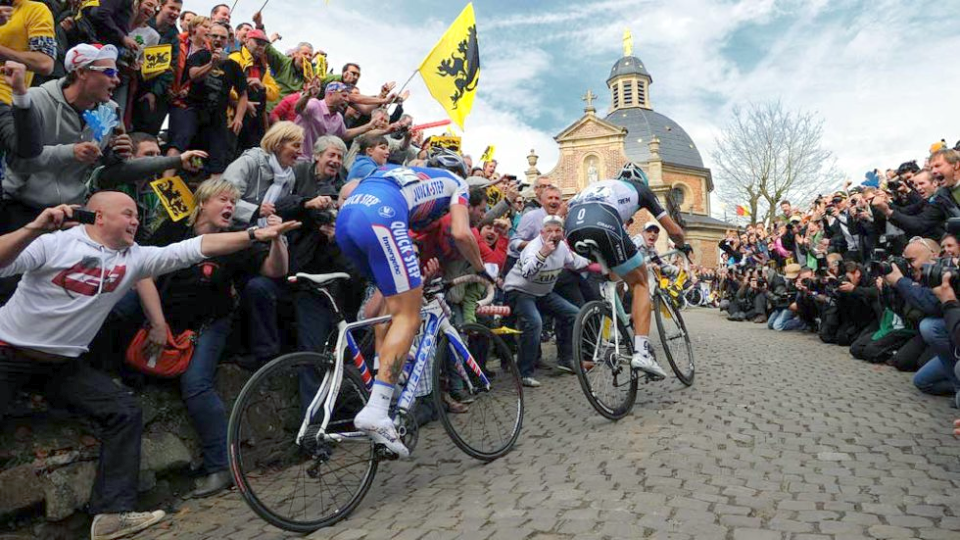 The Flemish Classics will reach a crescendo this Sunday at the Tour of Flanders.

The men will cover 272 km of racing at the Tour of Flanders, starting in Antwerp and finishing in Oudenaarde. Along the way, they will take on 18 climbs and seven stretches of cobblestones, with some overlap on those climbs that are cobbled.

Mathieu van der Poel, hopefully Wout van Aert, Kasper Asgreen and Tadej Pogacar, the world’s best one-day riders line up for one of the season’s most anticipated and important one-day races this Sunday.

The race lives up to its nickname “Vlaanderens mooist” — Flanders’ most beautiful — so pass the beer and frites, this is must-see TV from start to finish.

Beer and Frites! Fans turn out en masse for what many call a national day in Flemish Belgium. An estimated one million fans cheer from the roadside, beer tents, and bars along the winding route that takes in some of the emblematic climbs and cobbles in the Belgian monument.

The first 130 km or so, as the riders head southeast out of Antwerp, will be relatively gentle, featuring only two cobbled sectors and no official climbs. As the pack approaches Oudenaarde, however, things will immediately pick up in the first of what will ultimately be three trips up the Oude Kwaremont. The cobbled climb will herald the start of some serious challenges, with little respite for the riders from that point on.

Roads that loop back over themselves in the fields around Oudenaarde will take riders up and over nine more climbs and three cobbled sectors – including the cobbled Molenberg climb – before the next visit to the Oude Kwaremont. This time, the Kwaremont will be followed by its steep, cobbled neighbor, the Paterberg. With less than 60 km left by this point, we should start to see which riders are feeling strong and which riders are struggling on the tough terrain.

A final loop through the countryside near Oudenaarde should decide the race. First up is the brutally steep and cobbled Koppenberg, which is quickly followed by the Mariaborrestraat cobbles, the Steenbeekdries climb, the Stationsberg cobbles, and the punchy pavé of the Taaienberg. That flurry of challenges will almost certainly blow whatever is left of the pack to pieces. The Kruisberg, with 27 km to go, will provide a potential launching pad for a long-range move, and then the would-be aggressors will have their one final golden opportunity to get clear on the Kwaremont and the Paterberg.

Coming so soon after so many previous challenges, this last visit to the Kwaremont-Paterberg double will be a serious challenge for whomever is still in the mix.

From the top of the Paterberg, 14 km remain. The mostly flat finale into Oudenaarde will add a bit of final intrigue as any attackers try to hold off any chasers who are able to get organized as the road evens out.

Any wind will do an early breakaway no favors as the race heads from Antwerp to Oudenaarde, the route constantly changes direction and loops back onto itself in the second half of the race.

Defending champion Kasper Asgreen is back with his Belgian Quick-Step Alpha Vinyl squad with the likes of Yves Lampaert and Zdenek Štybar to support him, or go on the attack.

Wout van Aert, who won the Omloop Het Nieuwsblad and the E3 Saxo Bank Classic in Flanders may not start due to illness, but his.Jumbo-Visma team has looked fantastic this season, with Christophe Laporte and Tiesj Benoot as other strong cards to play on Sunday.

Mathieu van der Poel‘s late start to the 2022 season and big victory on Wednesday at Dwars door Vlaanderen make's him a big favorite. Van der Poel also already counts a Tour of Flanders win on his career palmares, but his Alpecin-Fenix team will have to prove up to the task of taking on Jumbo and Quick-Step.

Tadej Pogacar (UAE Team Emirates) is one of the sport’s most talented riders and seems capable of whatever he puts his mind to. The Flemish cobblestones are not the terrain on which he tends to thrive, but is a force to be reckoned with.

The Trek-Segafredo duo of Jasper Stuyven and Mads Pedersen, Matej Mohoric at Bahrain Victorious, and Tom Pidcock of the Ineos Grenadiers are also favorites too.