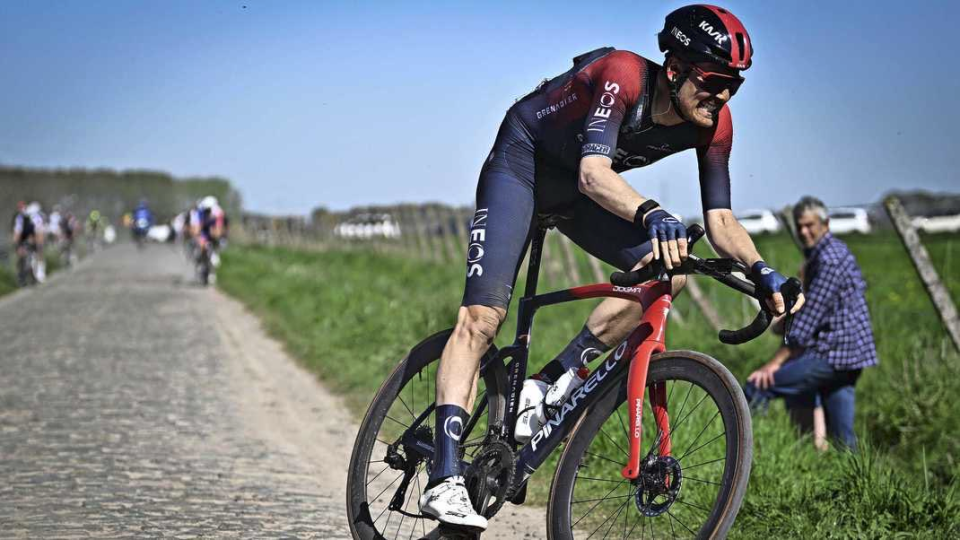 Van Baarle held his head in his hands crossing the line before leaping off his bike and hoisting it in the air as he screamed with joy and relief.

Van Baarle entered the Roubaix velodrome on his own. His win was doubly special as Paris-Roubaix, known as "The Queen of the Classics", because of its extreme length and difficulty, is rarely taken by a breakaway winner.

The 29-year-old Van Baarle had been threatening to win such a race. He finished a narrow second at both the recent Tour of Flanders, another of cycling's five one-day 'Monuments', and at the 2021 world championships.

"I'm lost for words, after the second at Flanders and now winning this race, its a Monument," said van Baarle.

"I couldn't believe it when I got the velodrome, really, I looked round to see if there were some other guys. I was completely alone and for the first time I started to believe I would win," said the winner.

Inoes team principal Dave Brailsford said Van Baarle needed all his experience as a rider to take the win.

"He's earned it, he's developed his career and that was ten years of experience all coming together for him. He's got his moves together and he's such a strong rider," Brailsford said.

The man who beat Van Baarle at Flanders, Mathieu van der Poel, was a big favourite on Sunday but could only finish tenth on the day.

"That was just relentless, nobody had it easy. I was at the back when Ineos made their attack. I went down fighting, but I couldn't hold on," he said.

The winner dropped his last companion on the toughest cobbled section of the closing stages, when Slovenia's Matej Mohoric could no longer hold on.

It is the first time Ineos Grenadiers have won this race.

The often bleak flat fields that skirt the Belgian border were a glistening green in Sunday's sunshine in stark contrast to the 2021 mudfest that took place in a deluge last October.

Van Baarle took 5hrs 37mins to finish the 257km course in bone-dry weather with a record setting average speed of 45.7kmh as riders were able to avoided the bumpy cobbles by racing on the dirt verges.