Intermarché - Wanty - Gobert Matériaux came into Gent-Wevelgem with strong ambitions and they took a brilliant win as Biniam Ghirmay put on a stellar performance, winning the sprint from the attacking group that went clear in the final part of the race 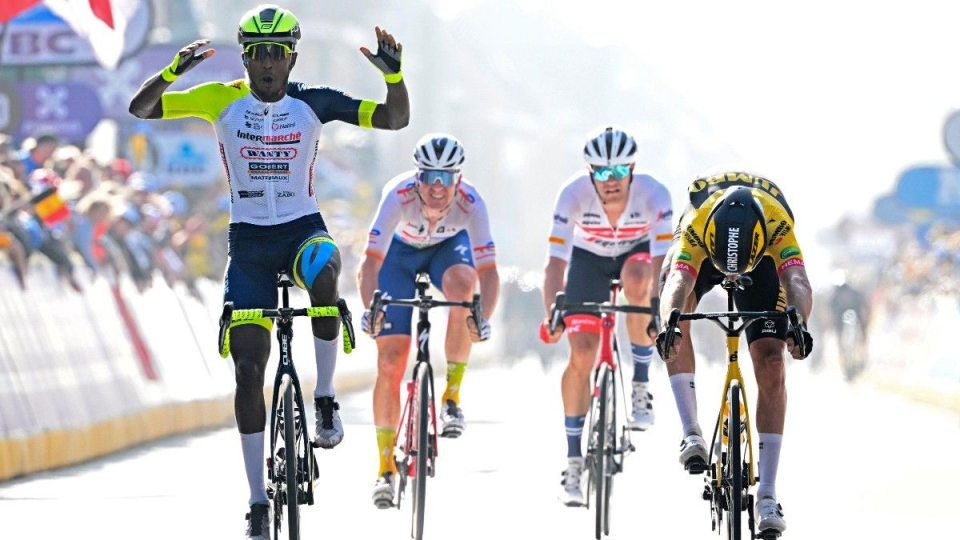 It was Wout van Aert who attacked, going solo but being reeled in by a small group on the descent, and with the headwind and lack of collaboration a group of around 25 riders came together.

The race may have be decided in a bunch sprint, however plenty attacks saw Laporte, Ghirmay, van Gestel and Stuyven make a move with 24 kilometers to go. The quartet collaborated well and put in over 30 seconds in the chasing group that relied on Groupama to do most of the work. Alpecin and Movistar put riders in front aswell despite evident struggles. Although the gap came below 20 seconds in the final kilometers, the peloton didn't have the legs to close the gap as many riders sat up.

Laporte lead the the breakaway into the finale, Biniam Ghirmay launched his sprint from behind early on. Despite a surge by Laporte, the 21-year old took a career-marking win.

Girmay is the first-ever African rider to win a Classic. Huge achievement from the Eritrean, who rides for Intermarché-Wanty-Gobert!

Girmay said afterwards to the media, "It's unbelievable, amazing. I cannot expect this. We just change my plan a few days ago on Friday. We just came for a good result. This race is amazing. Unbelievable."

"I don't think I'll stay for Tour of Flanders. I stayed here a long time – three months. I miss my wife and daughter so I want to go back home."

"Of course I feel much better but also there's really strong guys with me so I'm a bit afraid. But I felt confident in the last 250m. It's unbelievable, yeah."

"It changed a lot in the future, especially for all African riders."

"I lost many place, especially on the first section and on the first cobblestone. I felt a bit uncomfortable. But after i felt better and better, rode smart, followed. Then in the end you know everybody is waiting for Van Aert so I played it a bit easy."