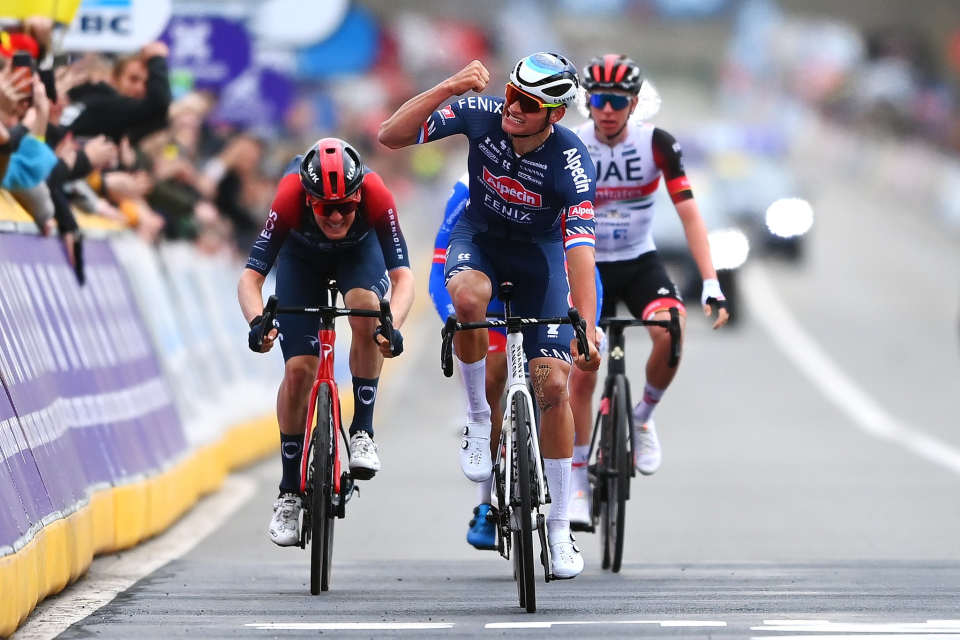 The pair broke away with 20km to go before playing cat-and-mouse over the final kilometre, allowing a small group of chasers including Ineos rider Dylan van Baarle and FDJ's Valentin Madouas to steal in for second and third at the line.

As the chasers caught the pair metres from the line, the 23-year-old Slovenian sat up and waved his arms suggesting he was boxed in, and swiftly left the finish line area.

Van der Poel had signalled his intent prior to Sunday by winning the Round Flanders race in midweek to prove his Olympic mountain bike crash injuries were behind him.

Team UAE leader Pogacar made the key break on the penultimate of 18 cobbled climbs 20km from home at Belgium's biggest one day race.

Only Van der Poel was able to follow as they opened up a 50sec gap on a small group of followers on the second ascent of the Oude Kwaremont.

Pogacar again attacked on the last climb of the Paterberg, Van der Poel showed deep resilience by clinging on and gambling everything on the final sprint.

"I nearly cracked on the Paterberg, the last climb" Van der Poel admitted, "It's a shame that Pogacar didn't get on the podium, he was the best out there today," said the Dutchman who is the grandson of legendary French rider Raymond Poulidor.

The Tour of Flanders is one of the five cycling monuments, the ultra-long one day races which includes Milan San-Remo, Paris-Roubaix, Liege-Bastogne-Liege and the Tour of Lombardy.

Second in last year's world road racing championships, contested on a similar route, Van Baarle came close to pipping his countryman Van der Poel on the line, dropping his head in disappointment after coming within a whisker.