With defending champion Egan Bernal unable due to start due to injury, who are the contenders for the Pink Jersey?

The organisers of the Giro d’Italia revealed the key mountain stages of the 2022 Corsa Rosa, with four mountain top finishes and ascents such as Mount Etna, Blockhaus, the Mortirolo, Santa Cristina, the little known but steep Menador, the Passo San Pellegrino and Passo Pordoi all to be climbed during the three week race.

The final mountain stage finishes atop the Marmolada at 2057m, with a final time trial to Verona expected to crown the winner of the 2022 Giro d’Italia.

The six mountain stages will be decisive for the general classification, and typically it favors GC riders who can really climb and have a good time trial.

The 17.1km time trial, featuring an uphill section in the middle, will close the race on May 29. It had already been announced that the Hungarian capital Budapest would kick off the event on May 6. The 2022 Giro will feature just 26.3km of time trialling, the lowest overall distance in the format since 1962.

In total, there will be seven stages set up for sprinters, six hillly stages, six mountain stages and two individual time trials. Two of those sprint sections will be in Hungary, with the action hitting the Italian roads from stage four onwards.

This Giro has been developed in order to give the riders the opportunity to fight for the Maglia Rosa and GC from the very first few stages. It will be one of the toughest routes in recent years with almost 51,000 metres of elevation gain.

Richard Carapaz has the best odds tto win the 120th Giro d’Italia race. What’s more, the 2019 champion is on a mission to claim his second win and will start the Giro d’Italia with an impressive 2021 record.

João Almeida is one of the top contenders for the 2022 Giro d’Italia title and could ruin Richard Carapaz’s winning hopes. This should not come as a surprise. After all, Almeida is the current Portuguese National Champion. Last year he finished in sixth-place. Almeida will be looking to step up by winning this year’s race. Almeida can climb really well and is a very strong time trialist

Another cyclist to watch at the 2022 Giro d’Italia is Tom Dumoulin, the Dutch cyclist is no stranger to Giro d’Italia success winning in 2017 and is desperate to return to his winning ways after struggling with form in the past few years. He can climb and time trial.

Simon Yates is also among the pre-race favorites, last year, Yates recorded a respectable third-place overall and has great climbing skills and a good time trial.

Miguel Ángel López is another cyclist who is a favorite to win overall, the Colombian has never won the Giro d’Italia.

After a rough and tumble 2021, Mikel Landa debuts his season with the Giro d'Italia and wants to return to the grand tour podium. With third in the 2015 Giro, Landa emerged as one of the most hyped grand tour riders over the past half-decade or so. He missed the podium in the 2017 Tour by one second. Following a heavy crash in the 2021 Giro, Landa just hopes to have a safe and traditional buildup to the season’s grand tours.

Colombian cyclist Egan Bernal (INEOS Grenadiers) won the 2021 Giro d'Italia, ahead of Damiano Caruso (Bahrain - Victorious) and Simon Yates (Team BikeExchange). Tour de France and Giro d'Italia champion Egan Bernal confirmed he would not participate in any of the three Grands Tours in Europe as he recuperates fully from an accident

The first real confrontation between the GC men will take place in the 4th stage, with start in Avola and arrival at the top of Etna. A ride of 166 kilometers, which is uphill at the starttoo. The final climb starts from Ragalna – as in 2018 – but then follows the route as in 2011 for the last 14 kilometers to finally finish again at Rifugio Sapienza.

Five days later – in stage 9 – it is again a summit finish with an arrival at the top of Blockhaus, the mythical climb that was also on the menu in 2017, exactly 50 years after Eddy Merckx achieved his first stage victory in the Giro. The stage is considered heavy, because Passo Lanciano (1st category) must also be climbed to arrive at Blockhaus. 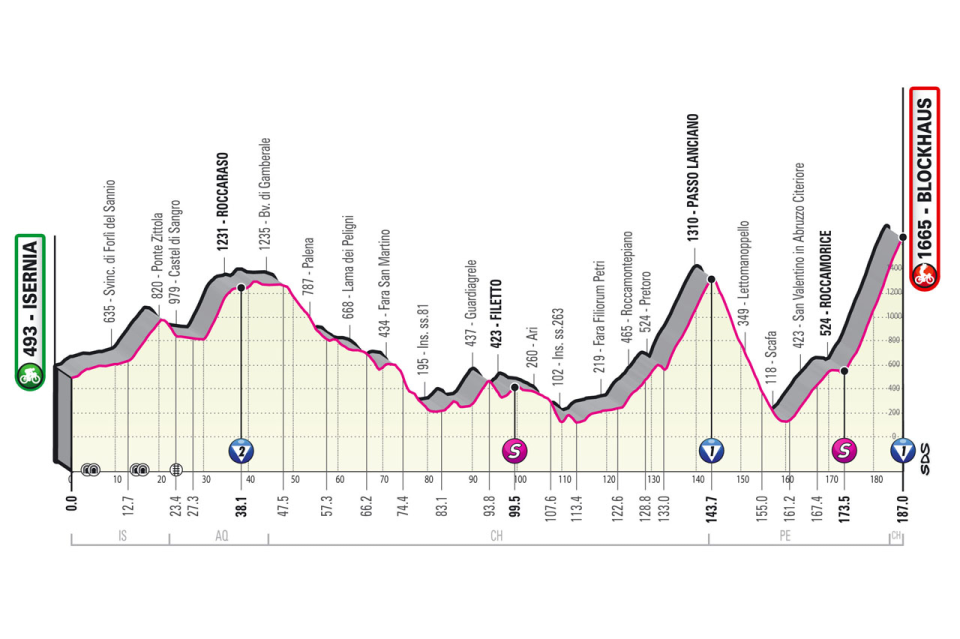 If these two stages are served as an aperitif and starter, the main course follows six days later, with three mountain stages in four days. Starting with the stage from Rivarolo Canavese to Cogne on Sunday, followed by a rest day. 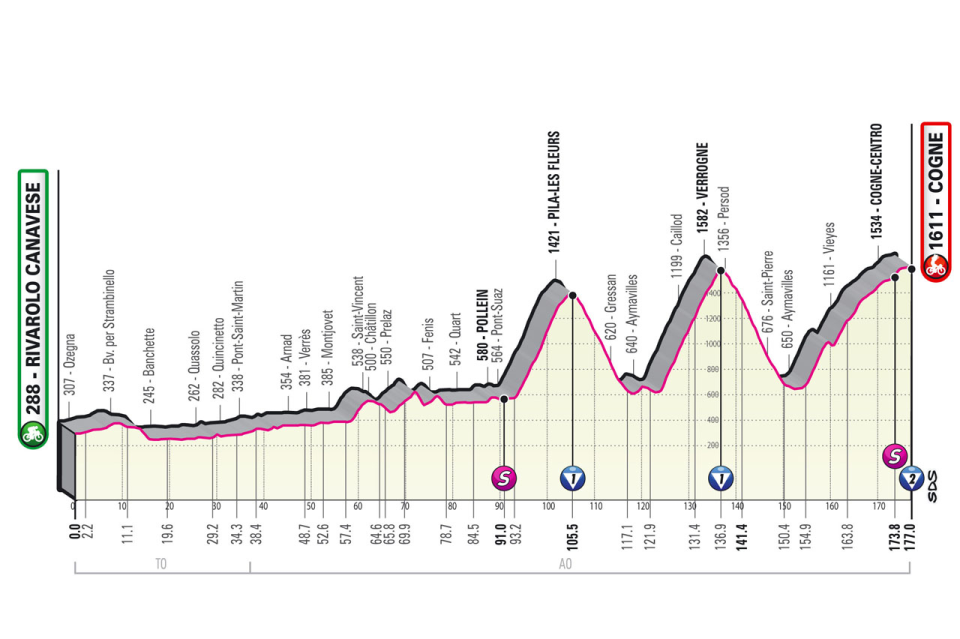 On Tuesday and Wednesday, the GC riders have to work hard again. First in the stage from Salò to Aprica, with the climb of the Mortirolo en route, then during the stage from Ponto di Legno to Lavarone, with two first category climbs in the final. 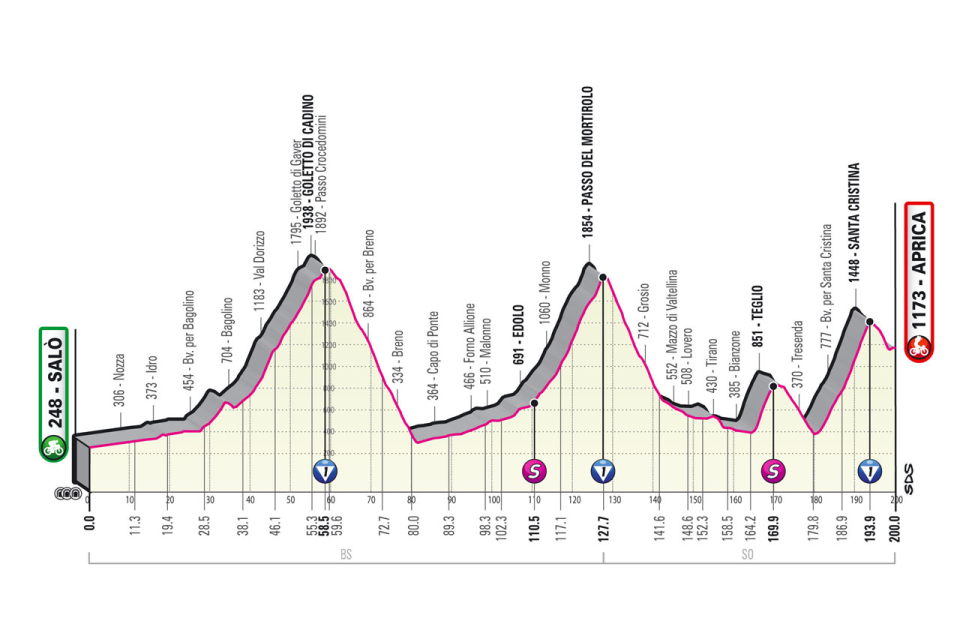 Finally, there is the penultimate stage in 2022 Giro d’Italia, with start in Belluno and finish in Marmolada, at the top of the Passo Fedaia. On the way, the peloton also has to cross the Passo Pordoi, Cima Coppi of this 105th edition of the Giro d’Italia. 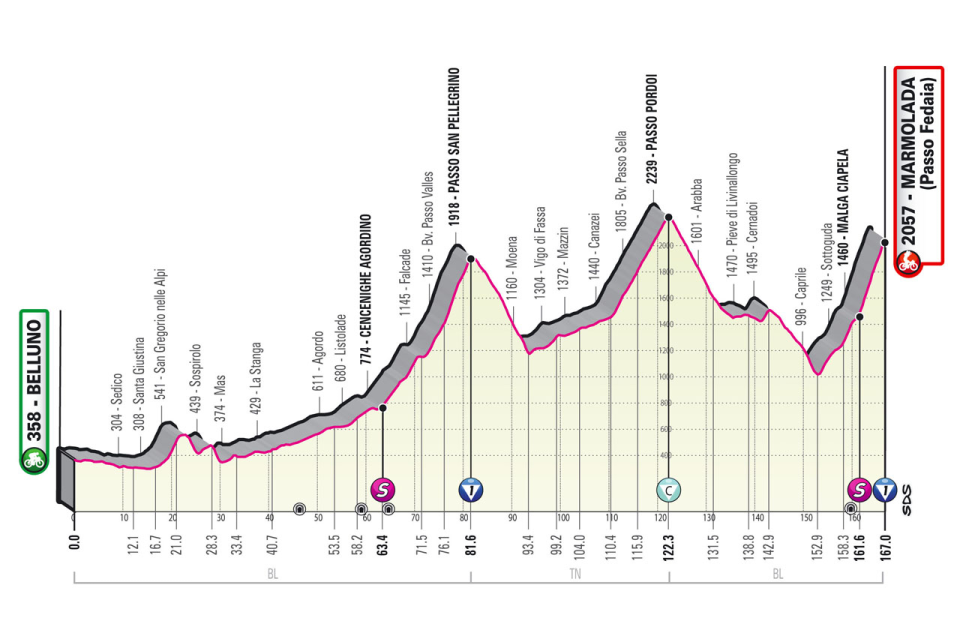