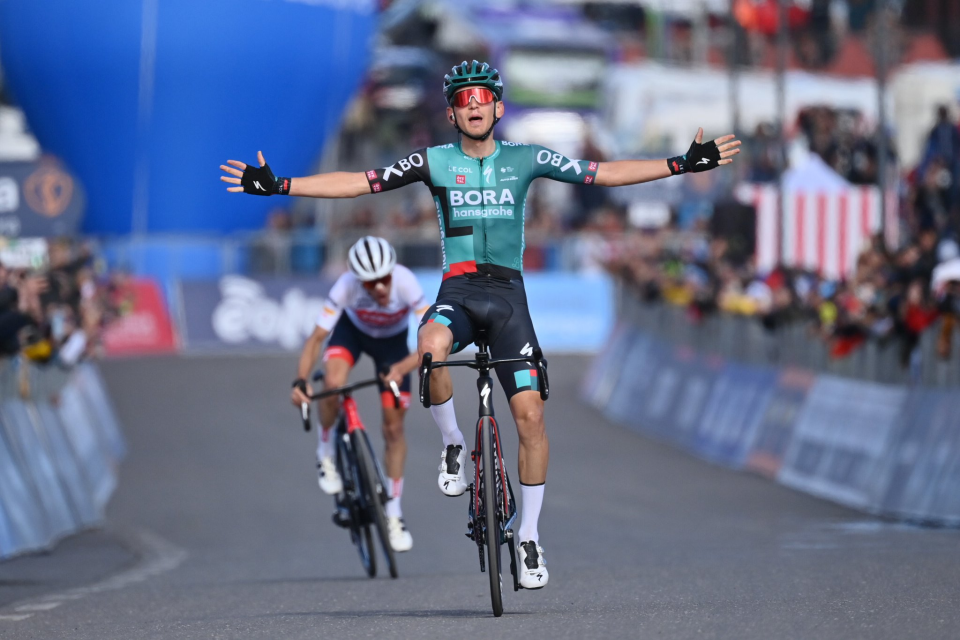 Stage 4 was no dobut going to be a dramatic stage even before it started.

Turns out the fist 50km were uphill and full gas as attacks after attacks reigned, eventually the peloton gave up the chase.

With 135 km to go, the breakaway had a huge lead of 11 minutes, behind Ineos Grenadiers set the pace.

With 25km to go,the breakaway hit the slopes of the fiercesome climb the first-category ascent of Etna (22.8km at 5.9%).

Stefano Oldani (Alpecin-Fenix) attacked and had a 30s lead at the foot of the climb, behind Van der Poel slipped out the back of the peloton saying goodbye to the pink jersey. White jersey wearer Matteo Sobrero was also dropped from the peloton.

Ineos Grenadiers continued to set the pace for Richard Carapaz.

With around 12km to go,Lennard Kämna (Bora-Hansgrohe) attacked the rest of his breakaway companions and opened up a gap and 3km later Kämna caught and passed Stefano Oldani (Alpecin-Fenix).

Behind Ineos increased pace, and with 8km to Tom Dumoulin was dropped from the bunch, his GC ambitions out the window.

Lennard Kämna (Bora-Hansgrohe) went solo out front until Juan Pedro López (Trek-Segafredo) bridged across to him with 2'5 km to go,  behind Rein Taaramäe (Intermarché-Wanty-Gobert) chased some 30s behind.

Behind the pace set by Ineos thinned the peloton down to around 20 riders, Vincenzo Nibali was dropped with 5km to go. A bad day for Team Astana as teammate Superman Lopez abandoned earlier in the stage with a hip injury.

Lennard Kämna said afterwards,"That was a super hard day, especially the final climb. I almost thought I lost the chance to win the day when I heard that López was 35 seconds ahead. But I was ultimately able to catch up. Then I tried to recover a bit for the sprint and that ended up being a good plan. To have this victory in the bag is particularly important for our team and takes some of the pressure off. Everything went well for us and we’re on the right track. I’ve now also taken the lead in the mountain classification, the first classification jersey I've worn in my career and I'm very proud to have done that."

“I am so happy to take the jersey,” said an emotional Juan Pedro López. “I didn’t believe in the moment when someone told me I had the pink jersey. After 10mins I finally realized it. I will enjoy it today, tomorrow – I don’t know how many days I will have it, but I will enjoy every moment.” On his attack: “My director told me to try and go in the hardest part [of the climb], so I did. It was the best moment to make the difference and when I went, I felt strong. You never know what happens, so I tried, but Kamna caught me in the last 2-3k, and we fought for the sprint. But I nearly crashed and… nothing. I wanted to win but it was so difficult. Then I found out I have the jersey, and I am so happy.”

Behind,all the rest of the favorites finishd in the Ineos lead bunch with just Domenico Pozzovivo trails in a few seconds behind.

Team Ineos Grenandiers did alot of work today without any real payback with everyone wondering why they put in such a huge amount of effort when their chances of catching the breakaway on the slopes of Etna where zero.

Really bad day for Team Astana and Jumbo Visma whose GC ambitions ended on the slopes of Mount Etna.

Stage 5 tomorrow from Catania to Messina is 172 km Flatish stage with just one 2nd category climb 75km in, this will probably be a sprinters’ stage that will most likely close in a bunch sprint.