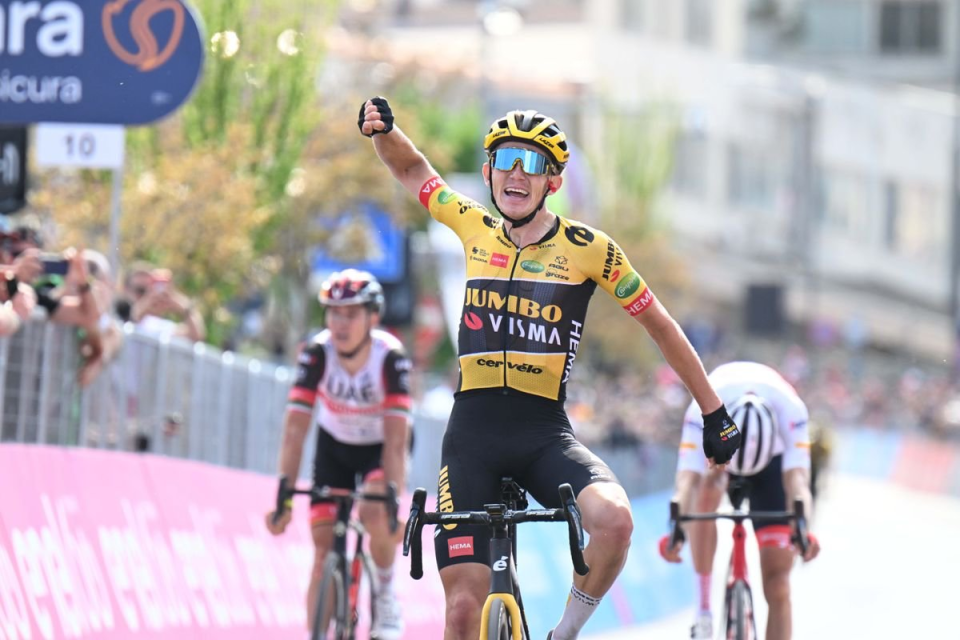 Bouwman was given a great leadout by Team Jumbo-Visma teammate - and 2017 Giro winner - Tom Dumoulin and sprinted to the line to edge out Bauke Mollema and Davide Formolo by two seconds as the Giro tackled its first mountain range, the Apennines.

It was only a second ever victory for Bouwman, who won a stage in the Critérium du Dauphiné in 2017.

"Unbelievable, like my first victory in the Dauphiné, I can´t believe it," he said. "It was such a hard day actually, and in the final we were four guys with two of us, and Tom did a superb job in the last 2k."

Bouwman had time to look behind and raise his arms over his head as he crossed the finish line of the 196-kilometer (122-mile) route from Diamante to Potenza that included four categorized climbs and almost zero flat sections.

All four had been part of a seven-man breakaway that managed to get away on the second categorised climb, the top classified ascent up Monte Sirino.

"I was feeling quite good the whole day," Bouwman said. "One time on the climb I had a bit of trouble. It was steeper than I thought but when I started my sprint I felt so much power left. I knew I was getting close to the victory and at 150 meters I looked behind and I had a big gap so, yeah, perfect."

Most of the overall contenders crossed the line together, nearly three minutes behind Bouwman. López maintained his 38-second advantage over Lennard Kämna after moving into the overall lead on Tuesday. Rein Taaramäe was third, 58 seconds behind López.

Saturday´s eighth stage sees the Giro return to Naples for the first time since 2013 when the city hosted the start of the Italian grand tour. The undulating 153-kilometer (95-mile) stage starts and finishes in Naples, but it leaves the seaside city to take in four laps of a 19-kilometer (12-mile) circuit in the volcanic surrounding area.