Giulio Ciccone storms to Victory as the Giro hits the Mountains 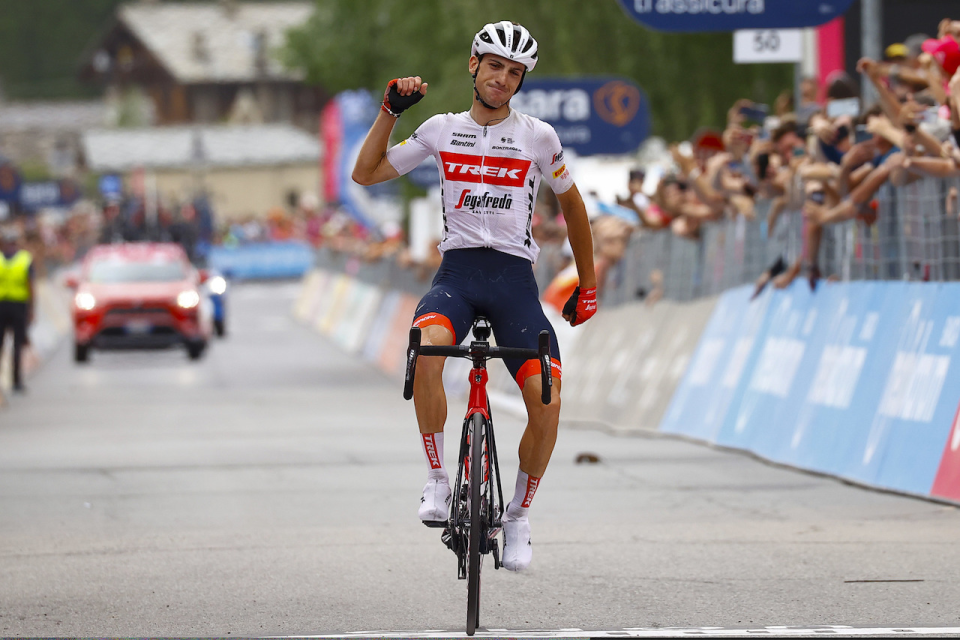 One day after Trek-Segafredo cedes the pink jersey in Stage 14, Giulo Ciccone stamps his name to his 3rd Giro stage win of his career, taking a solo win in Stage 15.

The Italian was part of the day’s big breakaway and won the uphill mountain stage by over a minute ahead from breakaway companon Santiago Buitrago (Bahrain-Victorious) after attacking with 18km to go.

Giulo Ciccone said afterwards, “Finally this win came. I really needed it because after a really difficult period I need to raise my arms in the air again.”

“I knew I came into this Giro with some question marks. The approach was not the best, I had to take antibiotics during the training camp. I missed Fleche, Liege, and this is why I decided to live this Giro day by day. Of course, I had the thought of GC but after Blockhaus it was clear this was not possible. Blockhaus was a very bad day for me physically but maybe more for my morale. But I promised myself after this that I was ready to change my race around and set new goals. Today was the proof of my reaction.

“Since 2019, my best season so far, I think many bad facts happened. And I was not able to show who Giulio Ciccone was. Especially last year I was really unlucky at the Giro and Vuelta and struggled to show my real strength. For me, I was always confident that I was able to show myself. It’s always difficult to confirm yourself again.  I really want to see and feel this win as a new starting point of my career.

“I think today I found my feeling again. It’s the way I approached the last climb, attacking, making the others tired. First we were 4, then 3, then 2 and then I decided to go alone. That’s my way to ride and I am really, really happy that I found again this feeling.

“On the final climb I wanted to see the reactions of the others. I felt [Santiago] Buitrago was the strongest competitor, so I looked mainly on him with [Hugh] Carthy went, I saw he was losing some meters, and that was the moment I knew I had to try and go alone and make the difference on the steep part.

“Of course, the best feeling was the finish line, the final kilometer, with all the people cheering. This was an amazing feeling that I have been missing. I feel that I am an emotional rider and this kind of feeling helps me a lot. I really hope that this is a turning point for my career and also for the Giro. We have had an amazing race this far with the pink jersey, we know we are a strong team, and this allows us a calmness to allow me and my teammates to make this final week even more special. We are looking forward to the last week.”