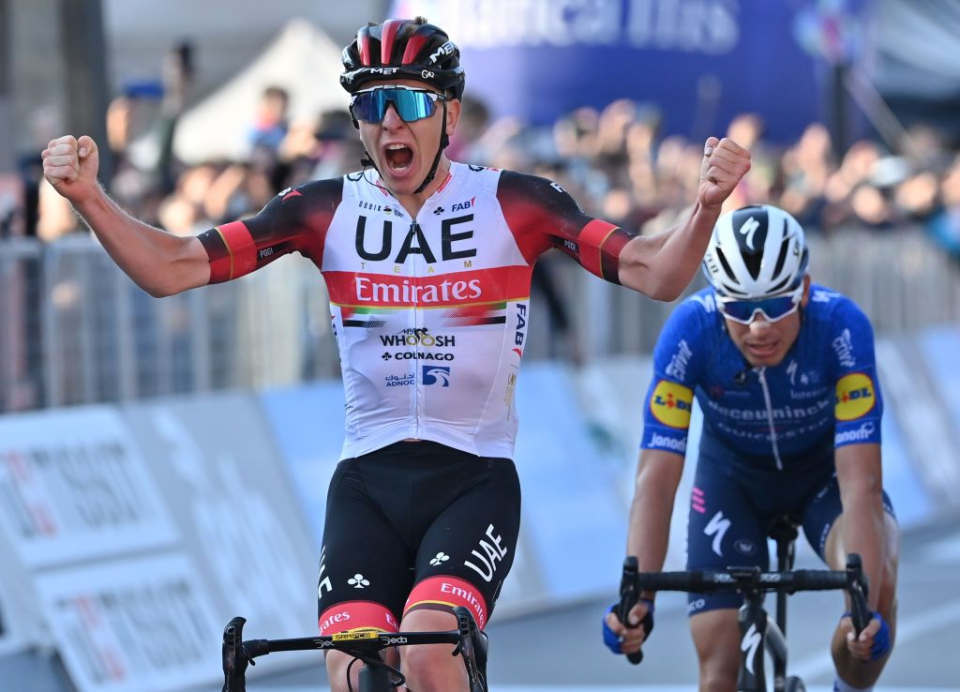 UAE Team Emirates rider Pogacar, 23, capped a stunning year by holding off a pursuit from local boy Fausto Masnada to claim victory in Bergamo after winning his second straight Tour de France and Liege-Bastogne-Liege this season.

Two cycling ‘monuments’ and the Tour in one season is a historic feat which puts the 23-year-old alongside the likes of Eddy Merckx and Fausto Coppi. It came after he attacked alone with 18 miles to the finish on his first appearance in the Italian race. Adam Yates claimed the final spot on the podium after sprinting ahead of some of the sport’s biggest names, including in-form Primoz Roglic and world champion Julian Alaphilippe.

“It’s crazy to finish the season like this. I’m without words,” Pogacar said after an exciting duel with Masnada.

“First, I thought when I attacked that someone would come with me. I guess it was so hard a race before that everyone was still thinking about the final. I just went solo.

“Every victory is important especially this one, I have been dreaming to start Il Lombardia and to race with the best here in Italy. Now I’m here and I took the victory.”

Pogacar attacked on the final climb

An eventful race began with a small group, initially led by Intermarche’s Jan Bakelants, breaking away after 30 kilometres and creating a gap of over six minutes on the peloton.

The 239km long Il Lombardia between Como and Bergamo saw the final monument of 2021. The ascent to Madonna del Ghisallo, which was decisive in past races, featured as the first of seven climbs this year. Ahead of the finish, the riders had to face a short yet steep ramp before the descent into the old town of Bergamo. With a strong field in attendance, numerous climbing challenges and around 4,500 metres of altitude, this proved to be a very difficult race.

By the time the leaders reached the Dossena climb with 55 miles remaining that lead had been cut to two minutes. Once over the Zambla Alta the leading group had been cut from 10 to five with the peloton just 25 seconds back. The last members of the breakaway were caught heading down the descent with 30 miles to go as the big guns battled for good positions ahead of the final 6 mile Passo di Ganda ascent, the key climb. The only major name out of contention by this point was BikeExchange rider Simon Yates, who had been dropped by the peloton with 40 miles to go and never made his way back to the front.

On the last climb, the reduced peloton broke up and there were several attacks from the group of favourites. Pogacar made his move about halfway up the Passo Di Ganda climb, bursting away alone after Vincenzo Nibali had been caught. Pogacar extended his lead over a clutch of star names to 35 seconds. He was chased by Bergamo-born Fausto Masnada, who charged down roads he knows well to chip away at Pogacar’s lead on the winding descent through the verdant countryside outside his home town.

Masnada joined Pogacar just as the descent flattened out on the way to Bergamo with 10 miles remaining with the chasing group 44 seconds back, a gap which remained more or less constant once the pack starting bickering over workload. But Deceuninck-Quick-Step’s Masnada was no match for Pogacar in the final meters and the Slovenian star crossed the line first to enter the history books.